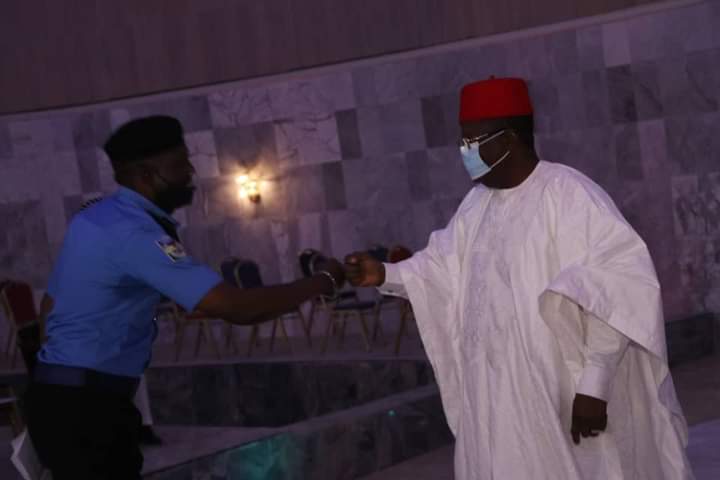 Gov. David Umahi has expressed disappointment over the performance of the police in Ebonyi state lately, saying that he nearly lost confidence in the force.

Umahi spoke in Abakaliki on Wednesday when he received the new Commissioner of Police for the state, Mr Aliyu Garba.

“I nearly severed my relationship with the police, but was restrained by the integrity of its Inspector General.

“How can police officers be inside their offices and hoodlums would attack them and collect their guns?

“This happened more than three times under the same commissioner of police and it is unfortunate.

“Cultists would be arrested and three or four days later, they are released into the society to further cause problems,” he said.

The Governor therefore urged Mr Garba, to do everything possible to mitigate the rising insecurity in the state.

“You are coming at a very trying moment in the state and should deal decisively with anyone instigating insecurity in the name of political party.

“It should be stated that some leaders instigate crisis in the state but when it comes to security issues, my party is God and the people.

Umahi said that the government had procured and would soon distribute operational vehicles to security agencies and urged the new commissioner to reactivate patrols across the state especially at night.

“Peace Ibekwe-Abdallah, a former commissioner of Police in the state conducted such patrols by herself as it would be difficult to achieve success without adequate monitoring,” he said.

He, however, expressed disappointment over the performance of the police in the state lately in the state saying that it had lost confidence in the force.

He also used the opportunity to urge the newly sworn-in Coordinators of Local Government Development Centres and Special Assistants to shun betrayal but be loyal and committed to the task given to them.

Garba, the new commissioner of police, thanked the governor for the reception and pledged to ensure the protection of the peoples’ lives and property.

“I intend to unveil and execute certain action plans that would make us achieve robust policing which would succeed with the cooperation of officers and stakeholders.

“We will collectively win the battle against all forms of crimes and criminality in the state while respecting the fundamental rights of the citizens,” he said.