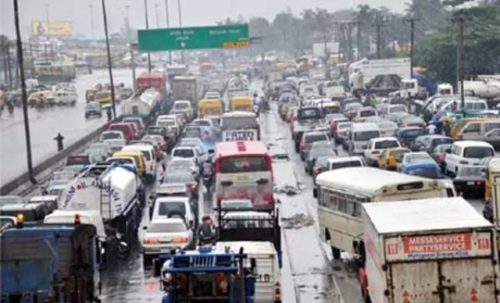 A typical gridlock on Apapa expressroad

Stakeholders have called on the Lagos State government to urgently intervene to save them as the perennial gridlock has resurfaced on the Apapa axis, with many stationary tankers and containerised trucks blocking the roads, thus making them inaccessible to residents and other road users.

The development is coming barely a month after Lagos State Governor, Babajide Sanwo-Olu, announced take-over of the control and management of traffic on the axis with the establishment of a team to build on the achievement of the Presidential Task team, which had successfully restored normalcy on the roads.

It was gathered that even after Governor Sanwo-Olu announced the decision of the state government to oversee the management of traffic on the axis, some mobile policemen, who served as members of the presidential task force, were still in control of traffic.

When newsmen asked some of the policemen around what was going on, they said the “state command is in charge, with Apapa Area Commander on ground.”

But stakeholders, who denied seeing anyone on ground, are calling on the state government to urgently intervene before the situation gets messier with trucks parking indiscriminately on the roads and bridges leading to the nation’s busiest port.

They argued that Apapa gridlock resurfaced and became worsened following the removal of the mobile policemen on the road two days ago.

A stakeholder, Ebenezer Babalola, who spoke with newsmen, said that “movement in and out of Apapa has become a nightmare following the recent changes on the enforcement of traffic management on the axis.”

“The state government mustn’t allow the situation in Apapa to degenerate into what it was before the intervention of the Vice-President Yemi Osinbajo-led Presidential Task team.

“The traffic management was relatively okay with vehicles having unhindered access to the port but in the last two days, life is gradually turning into hell with gridlock for us, “he said.

Similarly, Collins Mbekwe, a truck owner, queried the rationale behind the removal of the mobile policemen manning the Wharf axis while there is no better alternative.

He expressed fear that the current situation in Apapa would give room for graft such that only the trucker owners who can offer bribes will access the road.

“Why will they remove the working team? What is the rationale behind the sudden disappearance of the mobile policemen who hitherto enforced orderliness on this axis?

“Since the removal of the MOPOL, no law enforcement agent is found on the road to ensure orderliness. We don’t know who is now responsible for the traffic management.”

Also speaking, Iyabo Olowofuja, a resident, said that the return of gridlock has become a herculean task for them after a day’s job in the last two days.

According to her, it was shocking that many residents couldn’t go home last night because of the gridlock.

“We are calling on Governor Sanwo-Olu to carry out an independent investigation on what is responsible for the recent transportation bottleneck in Apapa with a view to finding a lasting solution to it.

“If the state government can’t manage the traffic situation, why did it allow the presidential task team to vacate the road?

“Why was the officer manning the road asked to step down? What is the Commissioner of Police, LASTMA doing as the traffic situation is getting worse by the day?”