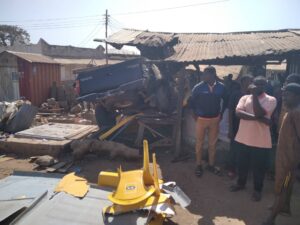 Picture of the pick-up vehicle that veered off the road in Bauchi.

The Federal Road Safety Corps (FRSC) has confirmed that a pick-up driver lost his life while three others were injured in a road accident in Bauchi, on Saturday, in Bauchi.

According to Mr Muhammed Bature, Deputy Corps Commander, Operation, FRSC, on Sunday, he said that the accident occurred as a result of suspected over-speeding by the driver.

He explained that the driver, who died instantly, lost control of the vehicle and veered off the road to hit two women and one motorcyclist, who had been taken to Abubakar Tafawa Balewa University Teaching Hospital (ATBU-TH) for medical attention.

The FRSC boss did not disclose the identity of the victims but said that the family of the driver had shown up and claimed his corpse.

“It was a lone accident caused by one pick-up vehicle, due to loss of control and over-speeding. The driver died, he smashed into two women and one commercial motorcycle rider. His corpse and the people who sustained injuries were taken to ATBU-TH, on Saturday night.

“The driver is from Bauchi town and his relations came to the hospital around 12:00a.m this morning (Sunday), and collected his corpse,” Bature said.