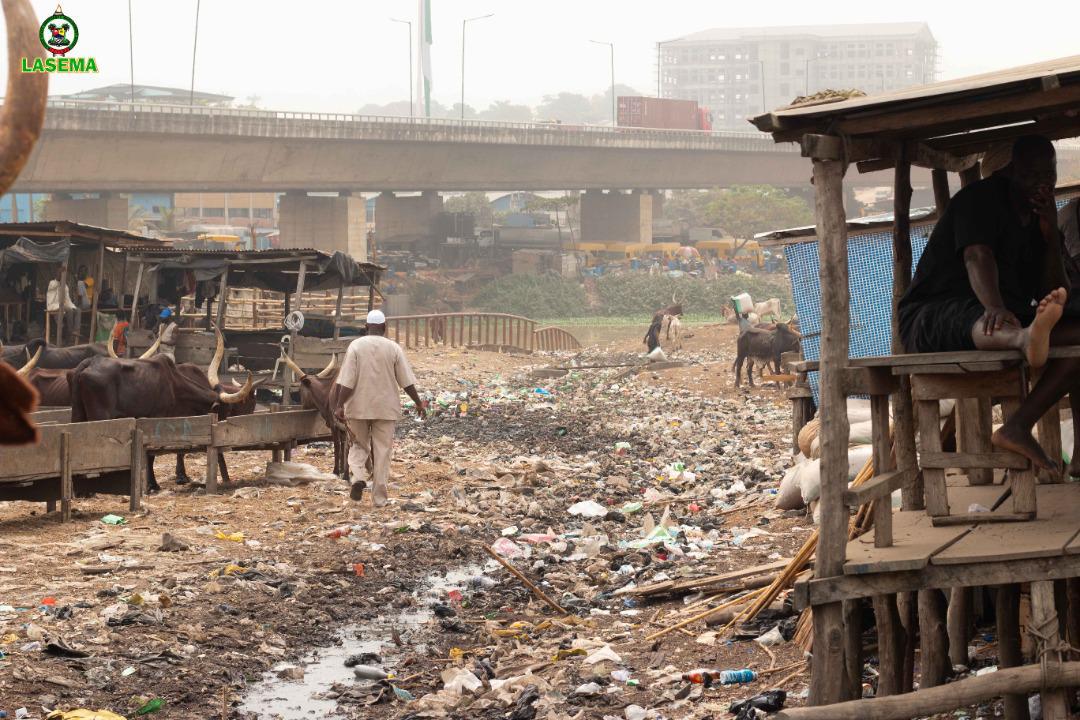 Worried by the indiscriminate disposal of waste at Kara market, officials of the Lagos and Ogun State Governments have paid a visit to the market to sensitize traders on the inherent dangers in such unsanitary activities.

Situated before the long bridge on Lagos-Ibadan expressway, Kara market which is not far from Ojodu-Berger, the border community between Lagos and Ogun States, is the number one spot for cows, rams, goats and livestock

Addressing newsmen after an on-the-spot assessment of the environmental degradation caused by activities of the traders, the Director-General of the Lagos State Emergency Management Agency, Dr Femi Oke-Osanyintolu noted that the unwholesome activities could lead to flooding of the Ogun river from the Kara end to Owode Onirin/Mile 12 axis and other parts of Lagos.

Dr Osanyintolu who was in company of the Special Adviser to the Ogun State Governor on the Environment, Mr Ola Oresanya pointed out that the waste generated at the Kara market abbatoir such as cattle dungs, meat waste and sewage were being dumped into the water ways and this could also lead to an epidemic.

He explained that LASEMA identified the problems at the market as part of the agency’s early warning system and in the spirit of collaboration, decided to draw the attention of the Ogun State government before the issue would become an emergency.

.”Whenever there’s emergency in Kara, we usually deploy our machinery there and we noticed that refuse had been piled up along the Ogun river and there are lots of water hyacinth on the water, indicating poor hygiene. We are in a pandemic already, and such unwholesome activities could lead to an epidemic, which would further worsen the health condition of people, and of course, if there’s flooding in that area, it is bound to affect Lagos” Dr Oke-Osanyintolu said

According to him, both the Ogun State Government and traders at the market have agreed to implement the recommendations made by LASEMA including the construction of a septic tank to store all human waste, waste Retention Tank at the Abattoir and thorough cleaning of the market as and when due.

The LASEMA DG also harped on the need for the Ogun State government to develop its waterfront, including the Kara area.

He said: “the Ogun state government and traders have agreed on a workable plan, comprising the increase of waste disposal trucks, we look forward to that and we will be on red alert monitoring the situation because the safety of life and health of the people is of paramount importance to the Lagos State government. However, the Ogun State government needs to look into development of the Kara area as a prime location, there’s a waterfront there and it should be developed in line with international standard”

Dr. Oke-Osanyintolu hinted that LASEMA and other agencies of the Lagos State government, under the administration of Governor Babajide Sanwo-Olu were ready to collaborate with their Ogun state counterparts to bring sanity to the area which is one of the major point of entry into Lagos.