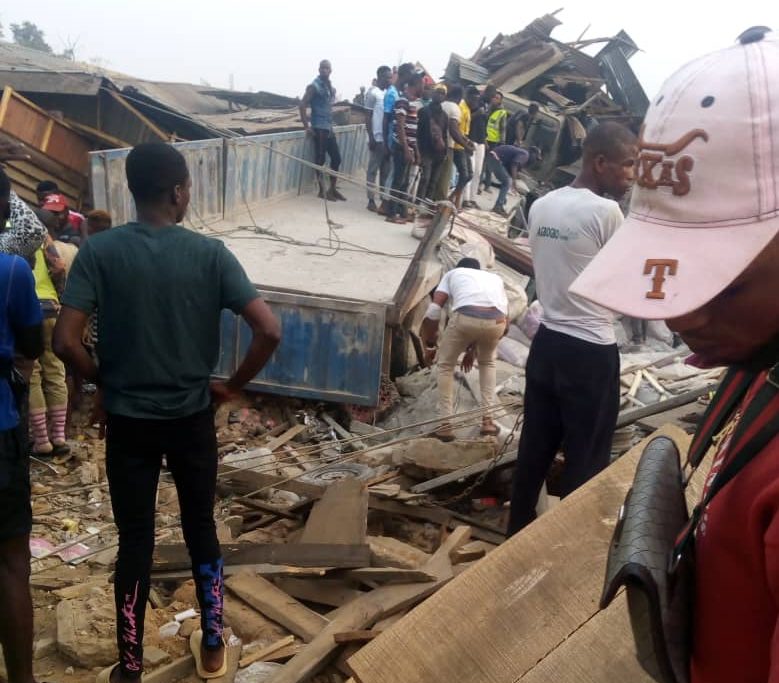 The scene of the accident with the killer articulated vehicle

Corps Public Education Officer Assistant Corps Marshal Bisi Kazeem said this in an interview with the News Agency of Nigeria (NAN) on Sunday in Abuja.

NAN reports that the accident occurred opposite the Adekunle Ajasin University campus barely a month after a similar accident in which no life was lost.

He said that the articulated vehicle lost control and ran into some shops at Akungba Akoko, Akoko South West Local Government Area of Ondo State.

He also said that the accident occurred seven kilometres from FRSC Ikare unit.

“The truck which was coming from Ikare Akoko area in Akoko North East Local Government Area of the state, lost control and ran into some rows of shops along the road.

“It had a brake failure. The number of people involved were 18; eleven females  and seven males.

“Nine people were killed in which six were females and three were males.

“Nine people were also injured in which five were females and four were males.

“Six bodies were deposited at Ikare Specialist Hospital morgue while some injured persons were also taken to the same hospital by the FRSC operatives for immediate treatment.

“The police deposited three bodies at Iwaro General Hospital and the other injured persons were also taken to the same hospital,” he said.

Kazeem said that students had blocked the road, prevented the removal of the articulated vehicle involved in the accident.

He noted that the Nigeria Police, the army and other security agencies assisted the FRSC.

He said that the Corps Marshal of FRSC, Dr Boboye Oyeyemi, had deployed safety engineers to Akungba to ascertain and recommend solutions to incessant crashes involving articulated vehicles.

He also said that the corps marshal had directed the deployment of more people to the scene in addition to an ambulance point recently established.