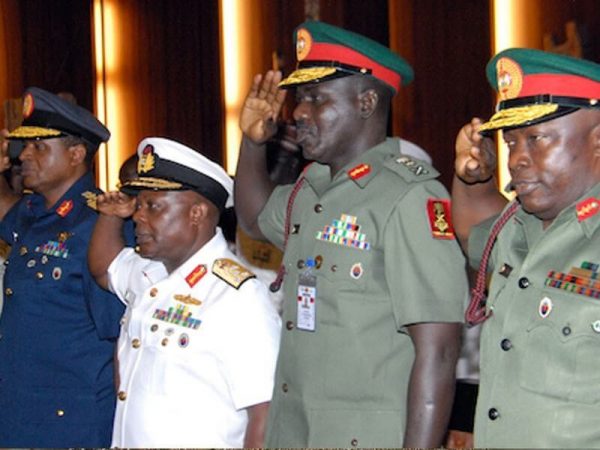 Nigerians have hailed the sack of Service Chiefs and the appointment of new ones by President Muhammadu Buhari.

Buhari had bowed to pressure by sacking the service chiefs after millions of Nigerians had called for their sack over wanton insecurity in the land.

In an announcement on Tuesday, Media adviser, Femi Adesina, said Buhari has accepted the immediate resignation of the Service Chiefs, and their retirement from service.

Nigerians have reacted to the sack of the service chiefs by Buhari, saying it was good riddance to bad rubbish.

A strong critic of Buhari, Reno Omokri hailed the president for the action.

“I commend General Muhammadu Buhari  for listening to voices of reason and sacking his clueless and nepotistic service chiefs. Good riddance to bad rubbish. It is disappointing that he maintained his practice of appointing largely Northern Muslim males, but half bread is better than none,” Omokri said.

Another critic, Ayodele Fayose, said the sacked Service Chiefs only served themselves and their pockets and could at best be described as “Disservice Chiefs” under whom Nigeria became completely insecured.

Senator Shehu Sani also said the removal of the service chiefs was good.

“Service Chiefs’ removal; better late than never. To the new Chiefs; Confront and end the killings, kidnappings and the violence in Nigeria and restore law and order,” he said.

Read other comments below

Buhari removing the service chiefs isn’t enough, he should have left with them.

But I’ll accept this one. But one thing we must know is Nigeria is already ruined.

The All Progressives Congress (@OfficialAPCNg) welcomes the appointment of new service chiefs following the resignation and retirement of the outgoing service chiefs.

The best news I have heard this year is the appointment of the new service chiefs. I am so excited, not because it will abruptly bring the end to the years of insecurity, but at least we would give another set of military men the opportunity to grow and try their best.

Thank God Nigeria had no service chiefs under GEJ when Boko Haram bombed the UN building in Abuja, bombed the police headquarters in Abuja and Bannex for example. Revisionist of life https://t.co/iejn3NvinM

Finally, Buhari has fired and replaced the Service Chiefs who were appointed in 2015. We are in a mess and insecurity is a major issue. I hope the new Service Chiefs will deliver.

Point of Correction: President Buhari did not sack the Service Chiefs. Rather, Buratai, Chief of Air Staff, Chief of Defence Staff & the Chief of Naval Staff all wilfully fired themselves after the President was unable to do the needful despite the prolonged public outcry

So Buhari has found his liver?
Hope the new service chiefs were chosen with brain and not with heart. We have had enough of incompetence.
Here is looking forward to Buhari having the guts to sack himself.

The new Service Chiefs should not politicise security by aligning with politicians.

What the country needs now is competence and professionalism that will reduce insecurity to the barest minimum. pic.twitter.com/O3JEpCFZ8b