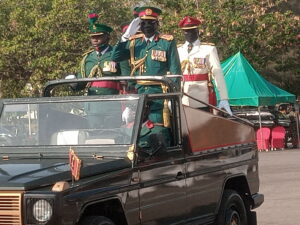 Buratai during his pull out from the Army on Friday

The immediate past Chief of Army Staff, retired Lt.-Gen. Tukur Buratai has appealed to politicians to always leave military out of politics.

Buratai who stated this in his valedictory speech during the Pulling Out Parade by the Nigerian Army on Friday in Abuja said the country needs politicians who are statesmen to support the military in addressing the prevailing security challenges.

He said that the army under his watch had achieved tremendous feat in the fight against insurgency and other security threats in the country.

He added that he ensured adequate training of personnel and enhancement of war fare capabilities of the army as well as prioritisation of personnel welfare.

“Today is a day of appreciation and not a stocktaking, but let me put on record that I left Nigerian Army better than I met it.

“The Nigerian Army under my leadership was able to achieve great feat in the fight against insurgency in the country.

“We have been experiencing pockets of threats here and there, but I can confidently say that no part of Nigeria is ceded to any terrorist group or criminals.

“The counter insurgency operation is a warfare new to Nigerian Army but over time, we have continued to device means of tackling the ever evolving dynamic nature of the threats in the country.

“The Nigerian Army has remained resolute in the discharge of its roles as enshrined in the constitution of the Federal Republic of Nigeria.

“I urge you all to continue to rise to the occasion,” he said.

Buratai said that while it was always necessary to say goodbye at a point in life, he said it was not easy to find the right word to say goodbye to the courageous and dedicated team that worked with him.

He said that Nigerian Army also made giant strides in infrastructure development across the country.

Buratai commended the officers and soldiers of Nigerian Army for their dedication and loyalty, which he said assisted him to achieve so much in office.

The former COAS also thanked President Muhammadu Buhari for the opportunity to serve the country as well as providing an enabling environment for him to succeed.

He also commended the effort of the government of Borno in the war against insurgency, assuring that the war would soon be a thing of the past.

He urged politicians to always leave military out of politics, adding that the country needed politicians who are statesmen to support the military in addressing the prevailing security challenges.

He solicited support for the new Chief of Army Staff, Maj.-Gen. Ibrahim Attahiru, to be able to deliver on his mandate.

Buratai was officially pulled out of service in a parade held in his honour at Mogadishu Cantonment, Asokoro, Abuja.