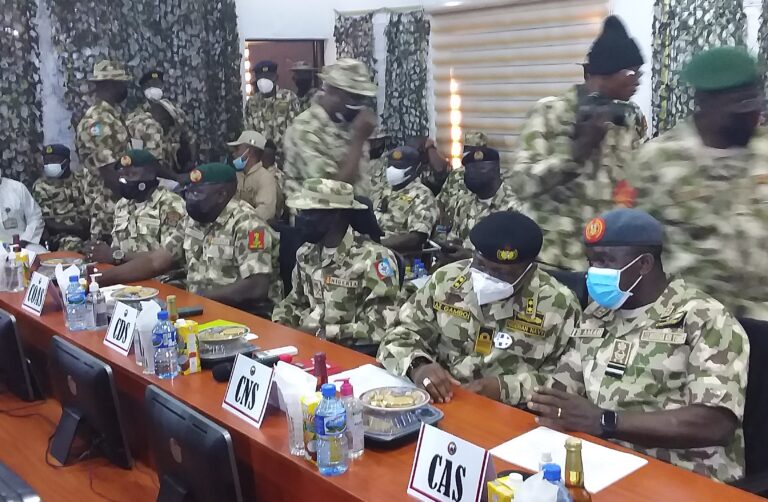 Gov. Babagana Zulum of Borno has pledged the support of his administration to the new Service Chiefs in their fight against insurgency.

Zulum made the pledge while receiving the Chief of Defence Staff (CDS), Maj.-Gen. Lucky Irabor and other service chiefs, who paid him a courtesy visit on Sunday in Maiduguri.

Zulum lauded the new security chiefs for their concern for Borno by making their first trip to the state.

He said that the military and other security organizations should count on his administration at all time in their effort to contain insurgency.

The governor called for more collaboration with armed forces in neighboring countries of Chad, Cameroon and Niger Republic.

He added that there was a need to enhanced ties between the military and civilian population to build trust and increase the military’s access to credible intelligence gathering needed in the fight against insurgency.

The governor also urged the service chiefs to tolerate fair and constructive criticisms that might be made in good faith to enhance their productivity.

While calling for synergy between security operatives, particularly between the Nigerian Army and Air Force, Zulum stressed the need for simultaneous operations in various parts of the state to contained insurgents from relocating or escaping onslaughts.

The CDS and service chiefs also visited the Shehu of Borno, Alhaji Abubakar Umar-Garbai, who assured them of the traditional institution commitment to mobilise support for the military.

In his remarks, Maj.-Gen. Irabor said the service chiefs were in Borno to interact with the troops and get detailed information from commanders on the fight against insurgency.

This, he said was needed so as to take necessary steps to boost their morale.

Irabor called for support from the government and citizens of the state as the military takes more measures to deal with the security challenge and restore socio-economic activities in the state.