How K1 bought N20m piece of land for me – Bolaji Basia 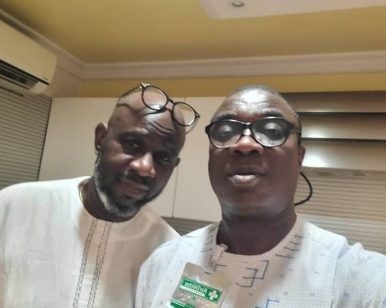 Bolaji, who has been friends with the Fuji King for four decades from their days in Agarawu, Lagos Island, stated this in a Facebook and Instagram post on Monday.

“I called the agent when I didn’t hear from the owner again He told me the property had been paid for. I asked him why and who? My thought was the owner was playing games with me so that he can increase the price.

“Until he told me it was my friend that paid for it… I called him to thank him and get his account number to refund his money. He told me OMO, THAT WAS YOUR 60TH BIRTHDAY GIFT FROM ME…

“I was like wow… still thought he was joking because business has been extremely dull for him which he told me himself and I can see it myself that many shows were canceled due to covid-19 partial lockdown on entertainment industry,” he said.

The man who once squatted the singer in Canada added: “Of course I knew he was going to support me one way or the other on the project but not 20m and definitely not this time that he wasn’t making money.”

Celebrating K1’s 63rd birthday in March 2020, Bolaji revealed that K1 squatted with him in Canada for months before he could buy a house.

“When you (K1) came to Canada, for months, you were sleeping on my sofa in my living room before you bought your own house. Even though I offered you a room, you still preferred to sleep on the sofa.

“Sometimes, when we wanted to travel with limited funds, you would suggest we paid for one room with single bed for us to share. There was no sacrifice too much for your music career back then – that is how passionate you are about your music till date,” Bolaji said.