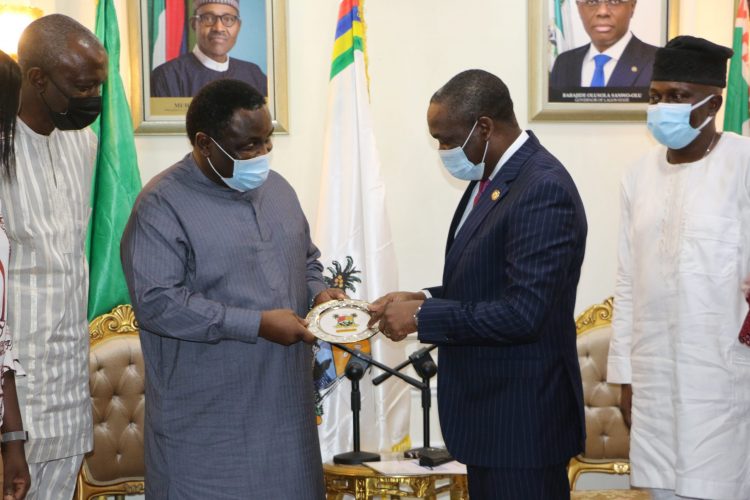 Deputy Governor of Lagos State, Dr. Kadri Obafemi Hamzat presenting a souvenir to the Managing Director/Chief Executive, Echostone Development Nigeria Limited, Mr. Sammy Adigun when Management of the Company paid a courtesy call on the Deputy Governor in his Alausa Office. Right is the Commissioner for Housing, Hon. Moruf Akinderu-Fatai.

Lagos State Deputy Governor, Dr. Kadri Obafemi Hamzat has stated that an effective mortgage scheme is a panacea to solving the housing deficit being experienced in Nigeria.

The Deputy Governor who received in audience Echostone Development Nigeria Limited and IFC (edge) at his Ikeja Office, noted that housing construction costs does not make for sustainable low-cost housing.

He said, “Our building strategy is not sustainable. It is easier to own homes if we resolve the issues of mortgage and not construction by individuals”.

Hamzat noted that studies have shown that it takes an average Nigerian 17 years to build a house and it is often done at the expense of other social needs such as education of their children, health plans among other.

According to him, the urge to make housing available to Lagosians informed the need to establish a Mortgage Board with the introduction of “Rent-to-Own scheme” which is critical strategy for housing delivery.

While also promising that the State Government will look at the possibility of incorporating and incentivizing the green concept in planning permit, Deputy Governor said, appropriate percentage reductions will be given to encourage building green.

Earlier in his opening remark, the Managing Director of Echostone Development Nigeria Limited, Mr. Sammy Adigun, explained that his company intends to deliver 100,000 green homes in Lagos with the Badagry as the take off point.

He said, the “Green Homes” has a 53% Energy Saving content which further translates into economic improvement for such homeowner.

Adigun further stated that investment in housing is critical to bringing people out of poverty as housing is key to life and if given attention, will change narratives.

He added that the EDGE award by International Finance Corporation (IFC) of the World Bank is an attestation to the sustainability of the Green Home Model.

He further urged the State Government to partner with his company by way of subsidy and grants so as to reduce cost of Green Homes.

The Leader of the IFC Team, Mrs. Temilola Sonola also stated that the organization can assist Lagos State by providing technical know-how to the planning Agency of government so as to allow developers undertake green houses.

She also said, the reduction in the area of time to obtain permits will be a critical part of the process of encouraging green homes.