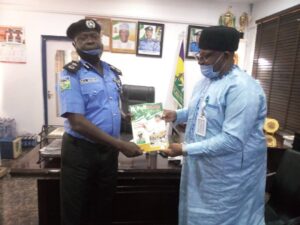 INEC REC in Kwara, Malam Garba Attahiru-Madami presenting a copy of INEC magazine to the new Commissioner of Police, CP Muhammed Bagega in his office.

The Independent National Electoral Commission (INEC) has called for an enhanced collaboration with the police towards ensuring peaceful conduct of elections in the country.

Malam Garba Madami, Kwara INEC Resident Electoral Commissioner (REC), made the call on Thursday in Ilorin when he paid a visit to the state new Commissioner of Police, Mr Muhammad Bagega.

He said the police were INEC’s major stakeholders on election security.

“In fact, the police are the leading security agency in charge of election in Nigeria because an election is a civic duty by all citizens of any country and the commissioner of police is a co-chairman on election security.

“They are in charge of election security in spite of their differential roles in the country,” he said.

Attahiru-Madami said that the 2019 general election in the state was regarded as the best in Nigeria.

“The election was free, fair, credible and transparent and was applauded and accepted by a majority of the people in the state.

“No incidence of violence was reported in over 1, 822 polling units of the state, I am proud of the police because security is indispensable for elections in Nigeria.

“In addition, the 2019 election was never challenged in court, same as the Patigi House of Assembly by-election.

“I want to seek for your continuous assistance, support and cooperation in future elections in the state,” he said.

He said he was happy with the synergy and cooperation existing among security agencies in the state.

“When I took over, my predecessor told me that the police were working with other security agencies in the state.

“We are ready to cooperate and collaborate with you, as far as elections are concern, security is number one.

“Outside election, we are extending our hands to others for credible information to make our job easy,” he added.