Insecurity: We must resist attempts to destroy Nigeria - Osinbajo 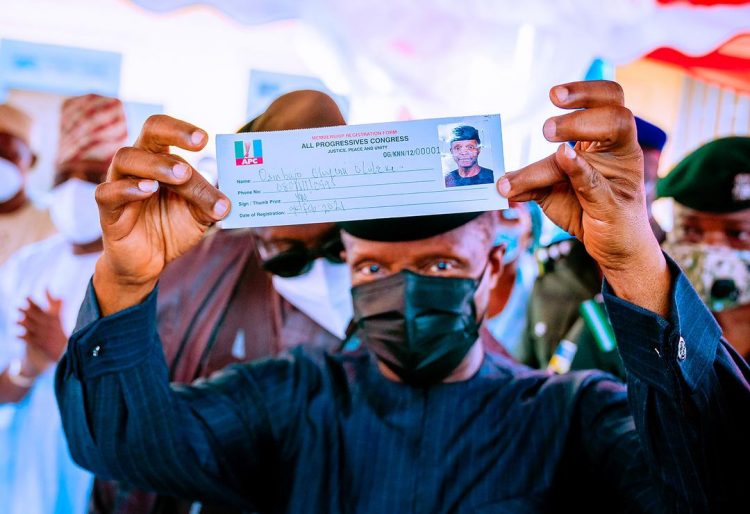 Vice President Yemi Osinbajo on Tuesday called for justice against victims of banditry, kidnapping in the country.

Osinbajo made this call while speaking with journalist in his home town Ikenne Local Government of Ogun State, during his revalidation and registration of membership of All Progressive Congress (APC), said there must prosecution of all those who have been arrested for kidnapping, banditry and all other forms of criminalities.

“There must be evidence that justice is being done. This is achievable by stronger collaboration between the Police, States Ministries of Justice and the Federal Ministry of Justice.

“We must resist any attempts to destroy the unity of this country. Our people have lived and worked together for decades. While we must attend to the the cries of communities for justice, equity and fairness we can do so within this same union. Ultimately we are stronger together than apart,” he said.

The vice president also noted that with the new Service Chiefs, there is a fresh look of strategies against insurgencies in the North East and every where in Nigeria.

“With the new Service Chiefs, we have a fresh set of eyes, intellect , and skills and a fresh look at strategies against the insurgency in the North East , as well as banditry and kidnapping elsewhere. In this new approach much greater emphasis is being placed on technology for surveillance, intelligence gathering and attack.

“Ultimately, we must put in place a State Police Structure. In the meantime we must speed up and strengthen the community policing structures, States must continually train, educate and formalize their local security structures so that they complement the Federal law enforcement agencies. Policing must be a collective effort.

The VP also expressed his delight in the revalidation and registration exercise.

“Party registration and revalidation is important because it offers us an opportunity to have a credible roll of members such that we are able to reach our members from the polling booth level all the way to the wards, local government, and federal constituencies.

“Party members must understand their importance in the scheme of things. They must fully understand party’s philosophy and programmes, they must be actively mobilized to participate in, propagate and support government programmes.”

He, however, urged all who want progress, prosperity abundance and justice to register as members of the APC.