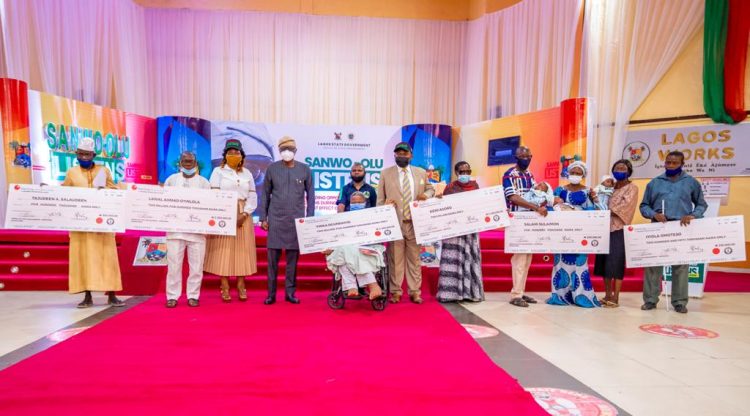 Lagos State Governor, Mr. Babajide Sanwo-Olu in a group photograph with some beneficiaries of the second Edition of ‘Sanwo-Olu Listens’ initiative at the Adeyemi Bero Auditorium, Alausa, Ikeja, on Tuesday, February 9, 2021. With him is his Special Adviser, Office of the Civic Engagament, Princess Aderemi (third left).

Not less than 50 vulnerable Lagosians were on Tuesday empowered through financial support from the State Government under an initiative caller “Sanwo-Olu listens.”

The initiative is a social welfare programme designer to provide support to those with medical and financial challenges due to COVID-19 pandemic and post effect of the EndSARs protest.

At the cheque presentation at the Adeyemi Bero Auditorium, Alausa, Governor Babajide Sanwo-Olu said the initiative was to empower the vulnerable and improve their living standards.

The Governor noted that with government’s limited resources, his administration would not shy away from making a genuine attempt at listening and engaging the citizens of the state with sincerity of purpose and intention with a promise to continue to support citizens through other Social Intervention Programmes, like Sanwo-Olu Cares, Ministry of Women Affairs and Poverty Alleviation, Office of Sustainable Development Goals, among others.

“I am really delighted to be at this event and listened to some of the beneficiaries as they tables their priorities. This is what government entails. Not only for the security of lives and properties. We know you would face health challenges, house challenges, children school fees, etc. and would find a way of giving succor and lift citizens out of the problems”, Sanwo-Olu said.

Speaking at the event, the Special Adviser to the Governor on Civic Engagement, Princess Aderemi Adebowale, commended the Governor for the laudable initiative, initiated to support struggling individuals in the State to cushion the negative effects of the COVID-19 pandemic.

“It is an understatement that a lot of people need financial assistance to solve a diverse number of challenges ranging from chronic ailments, varying degrees of disasters occasioned by unforeseen situations, to loss of jobs and businesses as a result of the prevalence of COVID-19 pandemic which the second wave we are experiencing now across the globe is more deadly than the first wave”, Adebowale said.

The Special Adviser maintained that the first beneficiaries of the initiatives did better, hence the opportunity to present the 2nd edition to the Governor, which he gladly approved.

“It therefore, gladdens my heart to report here that 50 indigent Lagosians who were beneficiaries of the first phase of the programme held on Tuesday 11th August, 2020 have done well. The monitoring team from the Office of Civic Engagement went round the beneficiaries to ensure that the money given to them by the Governor. Mr. Babajide Sanwo-Olu was used for the purpose it was meant for.

“Based on the impact assessment of the financial assistance on the socio-economic life of beneficiaries and with the testimonies that greeted the first phase of the initiative, Mr. Governor has graciously approved the extension of the gesture to another set of Fifty (50) vulnerable beneficiaries and those whose sources of livelihood have been affected by the lockdown and destruction occasioned by the EndSARS protest as well as those with chronic health challenges but lack the financial power to take care of themselves,” she said.

Adebowale, who said the selection process was fair and transparent, stated that a monitoring team was in place to follow up on beneficiaries to ensure judicious use of the financial support.

One of the beneficiaries of the Governor’s support was Mr Oluyinka Ogundaisi from the entertainment industry.

Sitting on a wheel chair, Ogundaisi narrated how he suddenly had a collapsed spine, which according to him required N500,000 monthly to be attended to after undergoing a surgery.

Mr Olalekan Lawal from Ayobo-Ipaja came to represent his son Oyinlola who undergone heart surgery that amounted to N12 million.

He said, “As a pensioner, I didn’t know where to get the money for the surgery. Later I got the phone number of Hon Gbenga Oyerinde, S.A. C.B.D. and he directed me to Civic Engagement.”

While appreciating the financial support form the Governor, he disclosed that his son is currently in India for the surgery.

“My son is currently in India, I want to appeal to you sir to visit you,” adding that “we need to appreciate you for the happiness you have brought to my family.”

Also giving support was Mr Sulaiman Salami, a vulcanizer whose wife gave birth to triplets. He expressed relief over the next intervention coming from Sanwo-Olu.

An Islamic cleric, Tajudeen Salam from Mushin thanked the Governor for the support on accommodation.

A highly elated Salam narrated how he had to resort to sleeping inside a mosque while his wife and four children took abode in a vehicle after their house was demolished.

Apart from providing accommodation, Governor Sanwo-Olu also asked his wife to learn a vocation or trade from WAPA where the government would give some money to start up a business.