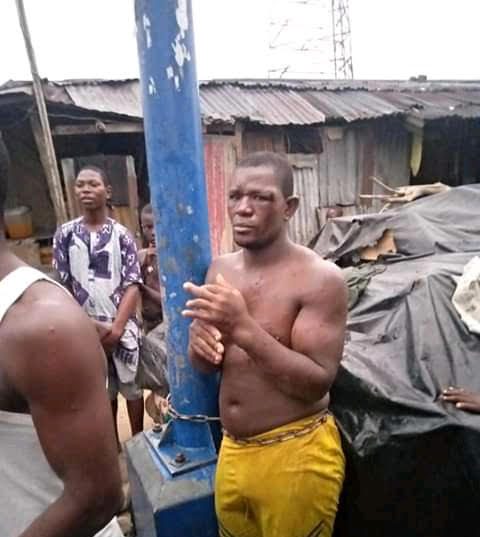 A middle-aged man who allegedly confessed to be a serial rapist with mystical powers to unlock any door of his victims has been nabbed via community policing in Obrigbene Quarters in Bomadi, headquarters of Bomadi Local Government Area of Delta State.

The alleged rapist who hails from Ojobo Community, but reside at Obrigbene Quarters has confessed that he has mystical powers to open any door no matter how secured it is to rape his victim.

The alleged rapist who stuttered to identify himself as Zilakumor was caught in front of his colleague’s house around 2am on Monday, February 8.

Witnesses said he was planning  to rape his colleague’s wife.

He said that this was not the first time he had made love to his friend’s wife unknown to her husband.

According to witnesses, the self-confessed rapist claimed that at the first occasion he had an affair with his friend’s wife, the door was locked but that he magically entered the house and had his way with his victim after he put the husband under spell.

He said he has been doing this even in his Ojobo Community before he was ostracized.

His colleague, who work with him said he was surprised to see his door opened and his wife not having knowledge of what was happening or had happened.

Eyewitnesses claimed that “to convince the people that he can open any door with mystical power, the padlock that was used to lock him unlocked itself twice.

A lady who craved anonymity said “we know this man and he has been carrying out such act but every time he is caught people will plead for mercy”.

They also claimed that he has power to sleep with a woman even when the husband is around as he hypnotised him until he finished his sex escapade and left the scene.

At the time of filing this report, the suspect has not been handed over to the Divisional Headquarters of Police in Bomadi.