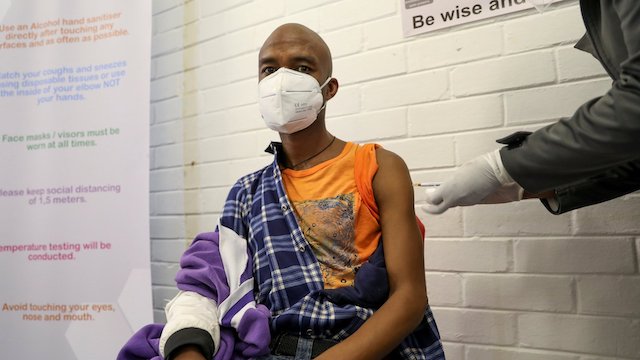 The country, which has recorded the most coronavirus infections in Africa and more than 46,000 deaths, had planned to start offering healthcare workers the AstraZeneca jabs soon but put that plan on hold on Sunday.

A government factsheet published on Monday said the J&J vaccine would be offered from mid-February. A senior health official said J&J had agreed to speed up deliveries so the first doses would become available around the end of the week.

“Our vaccine rollout plan has not changed, except that we will begin with the Johnson & Johnson instead of the AstraZeneca vaccine,” the factsheet said.

J&J said it was in advanced discussions with South Africa about “potential additional collaborations” to combat COVID-19.

“We hope to be able to share more details in the coming days,” it said.

Preliminary trial data showing the AstraZeneca shot does not significantly reduce the risk of mild-to-moderate illness caused by the more contagious 501Y.V2 variant first identified late last year was a disappointment not just to South Africa, but to the continent as a whole.

The 501Y.V2 variant is believed to have spread to nine other African countries, according to a World Health Organization (WHO) epidemiological report last week.

The AstraZeneca vaccine is seen as one of the best suited to weak African health systems as it can be stored at refrigerator temperatures, rather than the ultra-cold temperatures needed for shots from Pfizer/BioNTech .

The trial by researchers at the University of the Witwatersrand in Johannesburg did not assess whether the AstraZeneca vaccine protected against severe COVID-19.

Shabir Madhi, the trial’s lead investigator, told Reuters the AstraZeneca vaccine still had a major role to play in Africa and globally, and that it probably protected against severe cases.

The government is holding talks with scientists on how to proceed.

Malawi’s information minister said the country would move ahead with the vaccine when it becomes available, unless the 501Y.V2 variant became dominant there.

A Ugandan health ministry spokesman said the government would seek guidance from the WHO, and a Nigerian health official said the country would stick to plans to use the AstraZeneca shot.

Professor Salim Abdool Karim, an adviser to the South Africa government, said the AstraZeneca vaccine would in future be rolled out in a “stepped manner” to assess its ability to prevent severe illness.

AstraZeneca, which developed the vaccine with Oxford University, says it has already started adapting it against the 501Y.V2 variant.

South African health ministry Deputy Director-General Anban Pillay told state broadcaster SABC that the J&J vaccine was a good fit. Trials had shown it was highly effective in preventing hospitalization and death, and it can also be stored at fridge temperatures, he said.

Regulator SAHPRA has not yet authorized J&J’s vaccine but has been conducting a rolling review since late last year.

A source at the Russia Direct Investment Fund said talks were being held with South Africa over vaccine supplies but declined to elaborate.