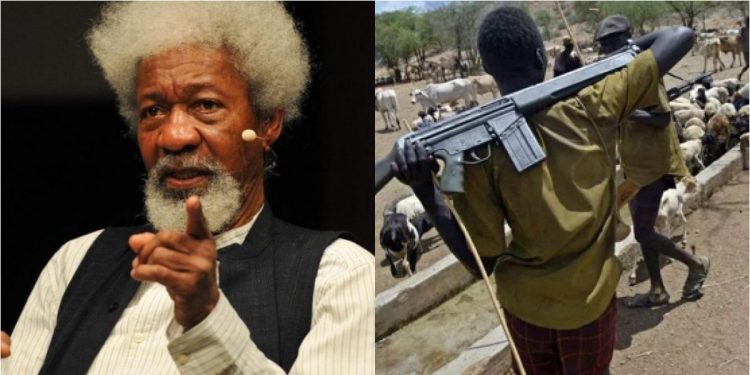 Soyinka and herdsmen with guns

The herdsmen reportedly arrived Soyinka’s home, Abeokuta on Tuesday afternoon, but the police were said to have arrived the house on time over the matter.

Soyinka is said to be in Lagos as at Wednesday.

When contacted, Police Public Relations Officer, PPRO, Ogun Police Command, Abimbola Oyeyemi said he could not speak on the matter as he and others were on their way to Soyinka’s house.

He said he would speak later after visiting the place to see things for himself.

However, unconfirmed source said some herdsmen have been arrested in connection with the case.

The reported attack is coming few days after Soyinka told President Muhammadu Buhari to speak out urgently, to stop the herdsmen crisis before it snowballed into a civil war.

In an interview with BBC Pidgin, Soyinka had said the herdsmen crisis is already a war now “right on our door steps”.

He said it is expectedly triggering some kind of mobilisation and stressed the urgent need for resolution.

“If we continue to wait for the resolution to be centrally handled, we are all going to become, if not already, slaves in our land”, he said.

He said the situation is simply intolerable and unacceptable.

He said he has made Governor Dapo Abiodun to understand what was going on.

“We are here not just to live, but live in dignity. Right now our dignity is being rubbished”, he said.

Soyinka who lives in Abeokuta inside a forest said his own space has been violated by the herdsmen.

He said he has been warned by his family not to venture into the forest again for any game hunting.

Soyinka said Buhari’s silence amid the atrocities committed by the herdsmen, meant he is complicit to their crimes.