You are a failed leader: 3 pro-Buhari groups descend on Gov. Ortom 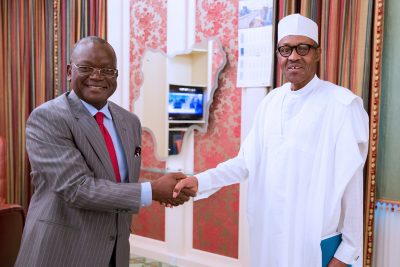 Three pro-Buhari civil society groups, have condemned Governor Samuel Ortom of Benue for attacking the President over the activities of criminal herdsmen in the country.

The groups are Nigeria Project Initiative; Initiative to Save Democracy and Global Economic Policy Initiative.

Ortom was reported to have accused the president of being “lenient’’ towards criminal herdsmen.

However, the leaders of the groups, Mr Mohammed Salihu, Akinloye James and Mr Bernard Okri in a joint statement in Abuja on Tuesday, dismissed the allegations against the president by the governor.

According to them, it is cheap and sensational for Ortom to blame Buhari for the ills of his government and the state, saying “the truth is that Ortom is Ortom’s problem, not anyone else.’’

The statement read in part: “We react to the widely circulated attack on the president by the Governor of Benue State Samuel Ortom, the summary of which is the allegation that President Muhammadu Buhari is “lenient“ towards criminal herdsmen.

“As friends of the Presidency, we like to defend the president by saying that contrary to the wrong assertion of the governor, President Buhari is a patriotic, nationalistic and fair-minded leader who is at all times ready to defend the Constitution of the Federal Republic of Nigeria.

“He is a leader committed to the defence of the rights of all citizens, majority and minority, including ethnic and religious minorities, meting out justice without fear or favour when crimes are committed.

“Under the Buhari government, the climate of impunity has been banished.

“Gov. Ortom is himself a witness to this when Benue State suffered attacks by criminal herdsmen and bandits.

“The Benue State Governor, Samuel Ortom, on the other hand is a failed leader with nothing to show to his people for all the years he has been in office.

“Under him, religious tensions have intensified. Inter-ethnic violence has remained pervasive. His contribution to Benue State in the last six years is seen more in the increased incidents of religiously and ethnically motivated criminal violence throughout the state.’’

The groups also stressed the need for the governor to do better in addressing issues of violence between farmers and herders.

“He must do better on the issues of violence against women, government corruption, extra-judicial killing and the mayhem unleashed by state-supported cultists and vigilance groups.

“The governor needs to be more responsive to the feelings and yearnings of his people.

“A governor, who collects monthly subventions from the centre, collects bailout funds from Buhari as do many other governors but fails to pay workers and pensioners should look at himself in the mirror to determine where his problems lie,’’ the groups said.