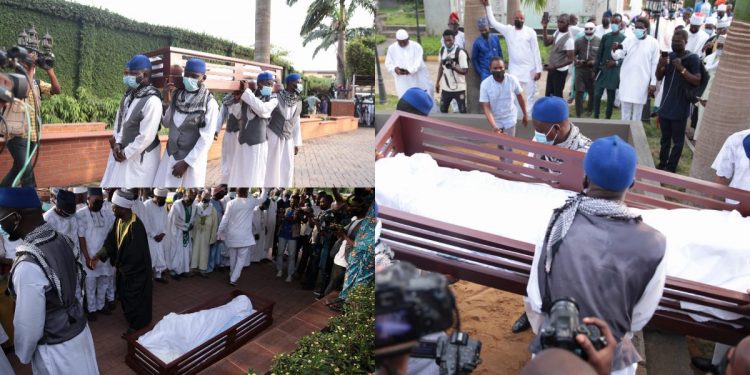 Tears flowed freely, as the first Civilian Governor of Lagos State, Alhaji Lateef Jakande was buried on Friday evening at the Vault and Gardens cemetery, Ikoyi area of Lagos, Southwest Nigeria.
Jakande died on Thursday at the age of 91.
His remains arrived the Vault and Gardens cemetery where he was buried amidst celebration and cheers.
His body arrived at the cement at exactly 5:11pm.
His body was accompanied to the cemetery with the staff of office of the Oba of Lagos, Oba Rilwan Akiolu.
Ahead of the arrival of the former Lagos governor for burial, the Lagos State governor, Babajide Sanwo-Olu; Deputy Governor, Obafemi Hamzat and Head of Service, Hakeem Muri-Okunola were at the cemetery waiting.
Other dignitaries who waited for the former governor’s arrival were Chief Imam of Lagos, Sheikh Suleiman Oluwatoyin Abou-Nolla; Lagos State Commissioner of Police, Hakeem Odumosu, among others.
His body was lowered to the grave after the Muslim prayer by the Chief Imam of Lagos, Abou-Nolla.
As his body was being lowered to the grave, there were tears from family members. His son, Deji Jakande was seen weeping at the grave side.
Tags:   Alhaji Lateef Jakande