Gorilla or monkey controversy in Awka after schoolgirl attacked 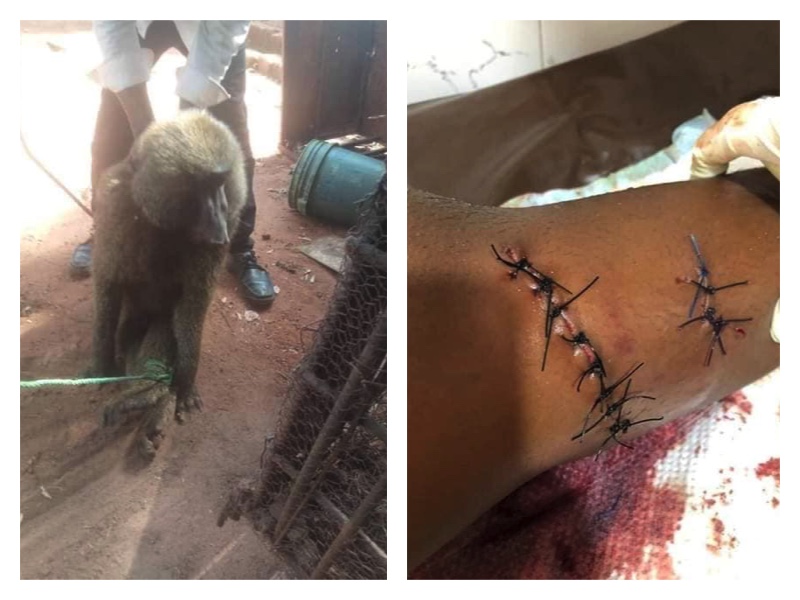 The monkey and the injured schoolgirl in Awka

Dr Flora Ilonzo, founder, Centre for Psychic and Healing Administration (CPHA), Anambra State, has denied allegations that a gorilla escaped from her centre to attack a schoolgirl.

Ilonzo said the attack was done by a monkey which escaped when its cage was being cleaned on Wednesday morning.

She said, however, that the monkey has since been re-caged.

“We were cleaning the monkey’s cage on Wednesday morning, unfortunately for us the monkey ran out and bite a girl that was going to school.

“Her father came to my compound to ask me for the name of the injection to be used for his daughter’s treatment.

“She was taken to Assumpta Hospital and the doctor asked him to come to me so that I will tell him the name of the injection to be used,” she said.

I went to that hospital immediately and showed them the anti-rabies injection. I also went by myself in search of the injection but could not find it in Awka.

“I urged them to calm down that I have made arrangements for the injection to be delivered as soon as possible.

“When the injection I ordered arrived, I gave it to them and they injected the girl and promised to discharge her in the evening.

“The child has also been discharged from the hospital. All I pray is for the girl to be healed,” she said.

A doctor at the Assumpta Hospital, who does not want his name mentioned, confirmed the incident and said that the child has been discharged from the hospital.

On the 10/2/2021 at about 8:am, there was a report at B’ division Awka that a Baboon at the Center for Psychic and Healing Administration, under the management of one Mrs Flora Ilonzo ‘f’ of Agu-Awka escaped from the cage and inflicted injury on one Chekwube Osita Dinma ‘f’ aged 13 years, of same address on her legs.
Scene was visited by the Area Commander Awka Metro ACP Yemi Ajayi and DPO B’ Division Awka. The injured victim was taken to the hospital, treated and discharged while the baboon was returned to a more secure cage for public safety.
Consequently, the owner of the centre, Mrs Ilonzo’s statement has been taken under caution and she was granted bail on own recognisance
The statement of the victim’s father has equally been recorded and investigation is still ongoing.
Meanwhile,the Command is collaborating with relevant government agencies in order to ensure that the animals at the Centre are securely kept properly to prevent the repeat of this kind of incident.