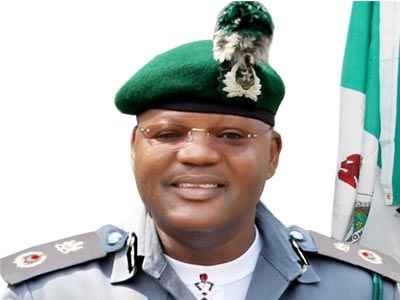 Retired Comptroller of Customs, Victor Dimka, has formally joined the All Progressives Congress (APC) in Plateau, describing APC as the party to beat.

Dimka registered with the party at Kabwir Pada Ward of Kanke Local Government Area of the state on Saturday.

The retired comptroller, who served in different formations including Comptroller, Seme Border Command, said he decided to join the APC after a careful research into the activities of political parties in the country.

“The process into any political party is the registration into the party and today is my first step and first day in the APC.

“I have checked, studied the different manifestos and made researches into the activities of all the political parties existing in the country today.

“I realised that even the blind can see and even the deaf can hear that APC is the party to beat.

“APC has brought dividends of democracy to many Nigerians including Plateau people and I made up mind to join the like minds making such possible and that is why I am here today,” he said.

The former comptroller of Forward Operation Unit (FOU) Zone C of Customs, said that after his personal research of political parties, he also consulted widely.

He stated that his intention as a man of the people was to contribute to the growth of his community, Kanke local government area, Plateau and Nigeria.

On his next line of action, the retired comptroller who is a fellow of National Security Institute said he was still consulting.

“I am still consulting, what I know is that a journey of 1000 miles begins with a step and this is the step that I have just taken,” he said.

He commended Gov. Simon Lalong and members of the State House of Assembly for their efforts in the provision of dividends of democracy to Plateau people.

Dimka said that governance was a continuum and that Lalong had played his part well, particularly in the execution of his legacy projects spread across the state.

He described the APC membership registration and revalidation as a worthy exercise that would help the party to get the data of its members.

He urged the people of the area and the state to come out in large numbers to register with the APC as there might be no second chance.

Kabwir Pada Ward APC Chairman, Mr Philip Jelek, said the APC was excited to have somebody of Victor Dimka’s pedigree in its fold.

Jelek said the arrival of Dimka would no doubt strengthen in APC in Kabwir Pada Ward, Kanke local government, Plateau and Nigeria.

According to him, the party is expecting more new members because of its outstanding performance over the years and its willingness to accommodate everyone.

He said that the registration/revalidation exercise was going on smoothly in the area.