Tight security, tension, as police take over Lekki Tollgate ahead of protest (Photos) 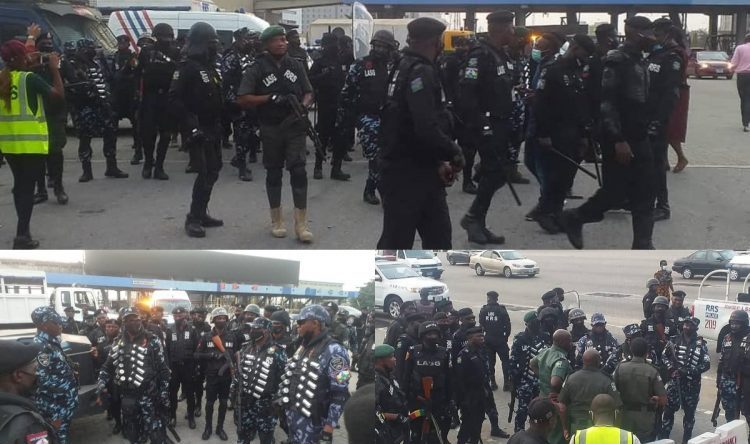 Ahead of today’s protest, heavily armed policemen have taken over the Lekki Tollgate, in readiness to quell and deal with anyone seeking to use the venue as scene of protest.

The reopening of the tollgate shut since the inglorious October 20, 2020 shooting of #EndSARS protesters, on the order of the Judicial Panel on February 6, is the reason behind the planned protest by #OccupyLekkiTollgate protesters.

The youths vowed to stage a protest on February 13, 2020 to express displeasure over the reopening of the tollgate.

The Lagos State Government and the Police have banned any protest at the tollgate, warning protesters to stay away, in order to avoid a repeat of the last protest that led to massive destruction of lives and properties across the state.

On Friday afternoon, heavy presence of armed policemen were spotted at the tollgate and in some parts of Lekki and other areas of the State.

They were led by the Commander, Rapid Response Squad, RRS, Yinka Egbeyemi, in a show of force, causing tension and panic in the area.

A Facebook post on the RRS page said “CSP Yinka Egbeyemi is presently leading a team of police officers on a show of force to Lekki Toll Gate (Admiralty Plaza) Obalende, Ikoyi, Jakande Roundabout, and other areas in Eti Osa as part of efforts to deter crime as well as boost the morale of his officers in the areas.”

As at this night, the police were said to have taken over the tollgate, waiting to quell any protest on Saturday.

According to Amnesty International, “Reports say, Armed policemen surround LekkiTollGate ahead of Saturday’s protests. Lekki TollGate was the scene of the violent crackdown on peaceful #EndSARS protesters in the night of 20 Oct. 2020.”