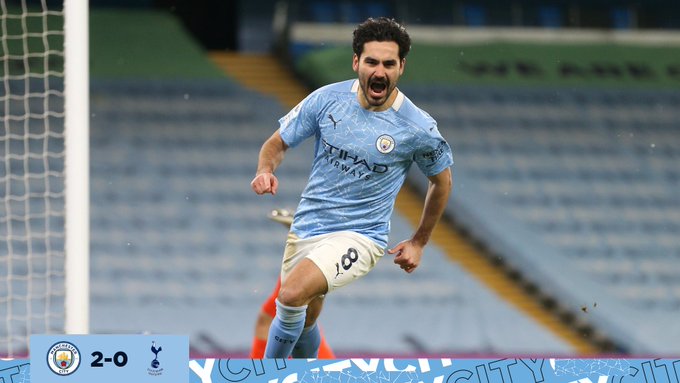 Ilkay Gundogan got a brace

Unstoppable Manchester City demolished Jose Mourinho’s Tottenham 3-0 on Saturday to cement their place at the top of English Premier League.

Ilkay Gundogan was the hero of the day, with his sensational scoring form, grabbing a brace in the match.
The German hit a second half brace for the second game in succession after Rodrigo had fired Pep Guardiola’s side in front from the penalty spot.

It was Gundogan who won the spot-kick, with Pierre-Emile Hojbjerg’s clumsy challenge allowing the Spanish midfielder to net the first penalty of his club career, which Hugo Lloris got a hand to but was unable to keep out.

The Spurs goalkeeper should have done better when Gundogan added City’s second four minutes after half-time, but he allowed the in-form midfielder’s toe-poke to squirm under his body following good combination play with Raheem Sterling.

Pep Guardiola’s side controlled possession throughout, but it was from a rare long ball forward that  allowed Gundogan to add his second and City’s third just after the hour mark.

Ederson was the unlikely provider, launching a raking pass over Davinson Sanchez’s head and the Colombian was outmuscled before being left on the seat of his pants as City’s No.8 drilled into the bottom corner for his 11th goal in his last 12 Premier League games.