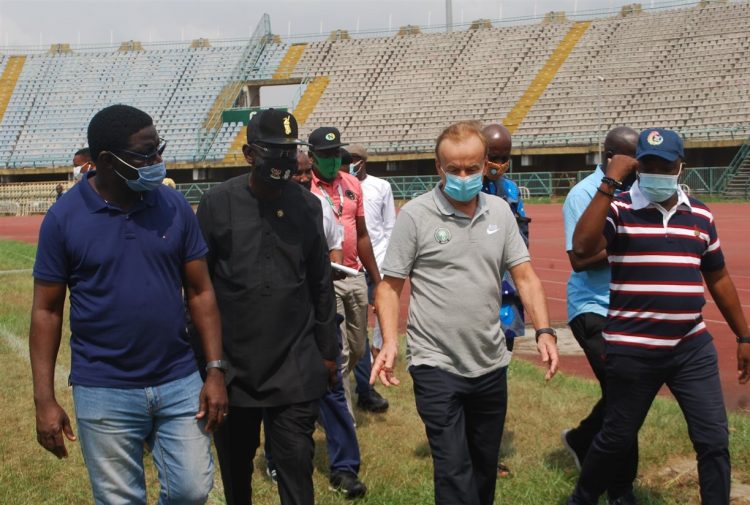 The Lagos State Sports Commission chairman, Mr. Sola Aiyepeku has said the Teslim Balogun Stadium would be ready for the Super Eagles game against Lesotho next month.

The chairman said this when the Super Eagles’ Head Coach, Gernot Rohr, visited the Stadium, on Friday for an on-the-spot assessment ahead of the African Cup of Nations (AFCON) qualifying match.

The Super Eagles are scheduled to play against Lesotho, March 30 at the Teslim Balogun Stadium which prompted the inspection.

The Chairman, Lagos State Sports Commission, Mr. Sola Aiyepeku, who led the Eagles coach and others on the inspection tour, reiterated that the pitch will be match-ready before the game next month. He added that the grass is already lush-green and there are just little finishing touches to be put in place before the qualifying match.

He said: “I am really happy that the Super Eagles Coach, who came for an on-the-spot assessment of the stadium to evaluate the level of our readiness was satisfied with what he saw at the Teslim Balogun Stadium”.

“I assure the Eagles Coach that the Teslim Balogun Stadium is a viable option for Nigeria’s home match against Lesotho. We have re-grown the grass in the last 15 months and a lot of work is in progress to ensure that the pitch is match-ready”, he added.