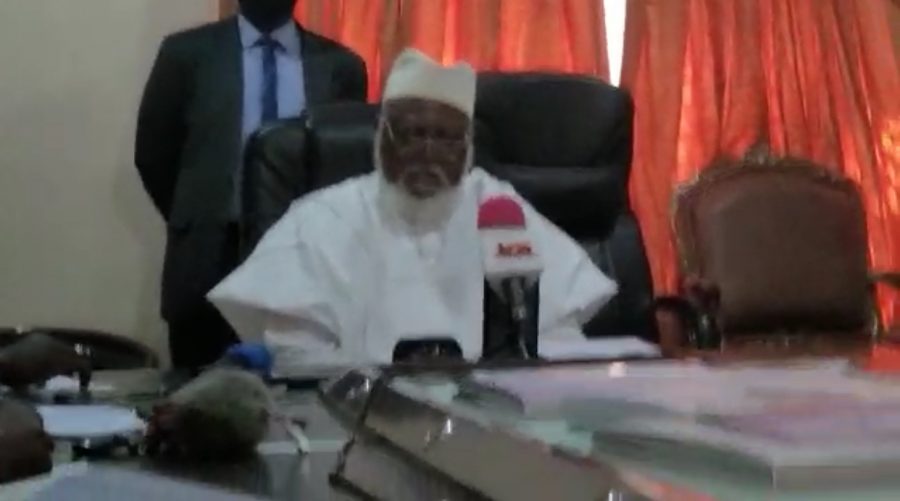 Abdulsalami Abubakar at the news conference in Minna on Tuesday

Abubakar made the appeal at a news conference in Minna on Tuesday.

He said it was only by living in peace that the desiredd socio economic development would be achieved.

He said that recent happenings in some part of the country of ethnic attacks is unfortunate and exacerbating the country’s problems.

“We at the National Peace Committee ( NPC) wish to add our voice to the voices of millions of Nigerians calling for calm in these difficult times.

“We appreciate the efforts of President Buhari for exploring all measures and ensuring that tensions are lowered.

“While commending our security personnel for their sacrifices, we appealed to the new service chiefs and the Inspector General of Police to rise to the urgent demands of the moment by rallying their troops and designing the best strategy for ending this tragic war.

” We appeal to the Governors ,Chief Security Officers in their respective states to please sheathe their swords, tone down their rhetoric and take full responsibility for managing the divergent voices and frustration within their States.

” My prayer is that Nigeria should remain as one indivisible nation and this could only be possible if we collectively shun any form of tribal, religious ,ethnic and political sentiment to meet our desires objectives of moving the country forward.

” We must rise up to work towards sustaining the nation cooperate existence and promoting our hard earn unity which our founding fathers had lay for us .

” I therefore, call on all Nigerians to work for the unity and development of the country as there is no other home like Nigerian”he said.

Abubakar also called on Nigerians to support the efforts of the security personnel with require intelligence information that could assist in the ongoing fight against banditry, kidnapping and other criminal activities in the country.

“I also appeal to traditional institutions, religious leaders as well as development associations NGOs to work towards mobilising Nigerians on the need to live in peace with one another.

” The time has come for all Nigerians to complement the efforts of security personnel deployed with required information on bad elements in their midst.

” We most demonstrate a high level of religious tolerance and harmonious co-existence in view of its diverse cultures and beliefs for peace, progress and political stability in our country.

” We are one people and must remain one. As leaders, we must work to make our people unite for the betterment of all.

” It was only by so doing that those behind insecurity in some part of the country would be apprehended in enhancing peaceful coexistence .

Abubakar also called on Nigerians irrespective of tribe, religious, ethnic and political differences to pray for peace, unity and prosperity of the country.

” Nigerians should support the political commitment of the Federal government in the ongoing fight against kidnapping, banditry, cattle rustling for peace, progress and political growth of our country”, Abubakar concluded.