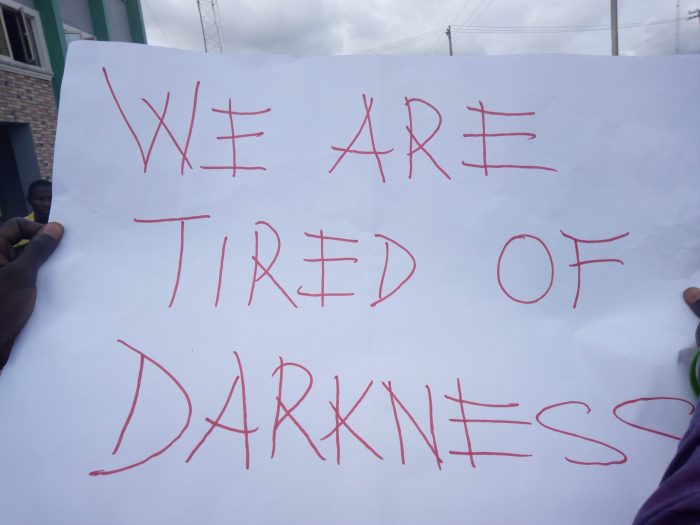 Residents of Akpabuyo Local Government Area (LGA), of Cross River, on Wednesday marched to the Port Harcourt Electricity Distribution Company (PHEDC) in Calabar, to protest the one year power blackout in the area.

The protesters, who barricaded the entrance of the PHEDC, carried placards with various inscriptions such as; “We are tired of blackout caused by Maurice Ibok (Calabar PHEDC Manager)’’ and “N857 Million Electricity Consumer Debt is a Lie.’’

Spokesperson of Akpabuyo residents, Mr Jonathan Osang, said that the area had been without electricity supply for “over a year’’.

Osang said that in spite of the blackout, they were still being served “high estimated electricity bills monthly’’.

“We are here to protest the non-supply of power to Akpabuyo for over a year now. Akpabuyo LGA, that is known as a city of light, is now a city of total darkness.

“We have to register our complaint and call on the attention of the management of PHEDC to, as a matter of urgency, look into our matter and restore power supply,’’ Osang said.

Another resident, Mr Prince Okon, said that all efforts to engage the management of PHEDC, with a view to resolving the issues, had proved abortive.

However, Ibok, who addressed the protesters, said he had met with a section of residents to explore ways of resolving the issues.

“We have met some of the residents in Akpabuyo; we have even promised to engage them to work with us.

“I am ready for us to settle this issue amicably and peacefully, but the idea of locking our gate and preventing customers from coming in to pay their bills is not appropriate,’’ he said.

Following the action, other PHEDC offices in Calabar were locked to prevent any act of vandalism, while police were deployed to forestall breakdown of law and order.