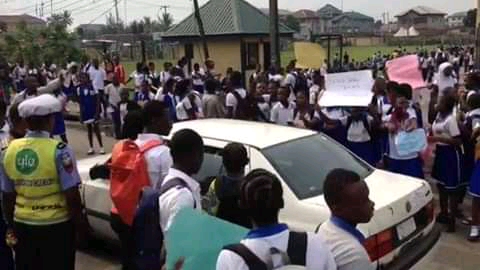 They demanded that Governor Nyesom Wike fulfills the promises made to recruit more teachers to fill the vacancies left by those who retired from teaching.

The students complained that no new teacher has been employed in the school in the past six years even when teachers have been retiring without replacement.

The students with various placards written “No employment of teachers for the past six years”, “All our teachers have been retired no replacement”, wondered how they would write their serious exams without core subject teachers like; Mathematics, English, Biology and others.

Some students who volunteered to speak on the condition of anonymity said that many have retired, either because of age or service years.

“We are just coming to school without being taught many subjects. When we ask why we’re told that the state government has not employed to fill the vacancies of those who are retired. We can’t continue like this.”

PM News correspondent who visited some other state schools in the metropolis reports that teachers have been employed to teach both primary and secondary schools in the state as announced by Governor Wike on Thursday, August 29, 2019, and that he had approved the employment of 10,000 teachers to boost the quality of education in the state.

There was an obvious scarcity of teachers in almost all the schools visited.

While announcing the recruitment of teachers, Wike had declared that his administration was committed to creating access to basic education for rural and oceanic communities of the state.

He announced this during a courtesy visit by a delegation from the World Bank Better Education Service Delivery for All (BESDA) to him at the Government House, Port Harcourt.

Wike said then that the state government embarked on the reconstruction and furnishing of rural schools to encourage parents to send their children to school.

Wike also explained that his administration abolished every form of fees in primary, junior and secondary schools to encourage parents to educate their children.

“I have abolished every form of payment in primary, junior and senior secondary schools because many parents are poor and they cannot afford these payments.

“We have taken the burden away from them so that poor parents can conveniently send their children to school,” he said.

He added that the State Gohat 10,000 Teachers were not employed as promised on August 29, 2019, again on Wednesday, October 28, 2020, Rivers State Executive Council presided over by Governor Wike, approved the employment of 5,000 youths into the State Civil Service, but was silent on earlier approval for the recruitment of 10,000 teachers.

More than four months after the promise to employ 5,000 youths into the state civil service and the announcement to recruit 10,000 teachers in 2019, none had been fulfilled.

The obvious shortfall of manpower in all sectors in the state, especially, the teaching profession is perhaps the hardest hit in government schools.

The Commissioner for Information and Communications, Paulinus Nsirim, had explained then that the recruitment drive undertaken by the Wike administration will cushion the employment gap in the state.

Parents and students who spoke are pleading with the government to expedite action to employ teachers to teach the future leaders.

During the investigation, a former beneficiary of the federal government N-power programme lamented that some schools in the rural areas, wholly depend on either N-power who come to some specific days in a week and National Youth Service Corps (NYSC) members.

“Some are in terrible conditions not fit for teaching and learning. Few Teachers in those schools are suffering. The government should rescue education at government-owned primary and secondary schools”, she said.