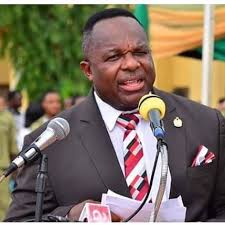 A total of 32 corps members who served in Lagos State in the 2020 Batch ‘A’ will have their national service extended or repeated as punitive measures for misconduct.

Mr Eddy Megwa, Lagos State Coordinator of the National Youth Service Corps (NYSC), announced the punishments at the passing out parade of a total of 5,720 corps members across the state.

According to him, some of the affected corps members were not available when needed, while some absconded outrightly.

He did not specify the number to repeat the national service or those whose service will be extended.

Meanwhile, Megwa announced that Mr Oluwatimilehin Adegbite would get a state merit award for exceptional performance.

He said that most of the 2020 Batch ‘A’ corp members behaved well.

The coordinator, who described the batch as ‘Pandemic Batch’, praised the batch for resilience.

According to him, corp members in the batch spent only 11 days in camp and were ordered home by NYSC, following the COVID-19 pandemic.

” In spite of that, most of them showed resilience,” he said.

“These 2020 Batch ‘A’ corp members are very unique, they really distinguished themselves individually and as a set. I am highly impressed with their general performance.

” Even when the nation shut down because of coronavirus and we directed them to go home and work virtually, most of them were still eager to work.

“I am proud to say that corps members in Lagos State made visible impacts in all the LGAs,” he said.

The coordinator added that some corps members donated their allowances to get palliatives for indigent people.

“I salute their commitment, ” he said.

Megwa, who noted that the NYSC was one of the major unifying and enduring institutions in Nigeria, urged the corps members to shun tribalism and promote unity and peace.

He also appealed to them to continue to comply with COVID-19 prevention protocols.

He advised those who learnt skills to make the best use of them in the absence of white-collar jobs.

He said that those who would be privileged to get white-collar jobs should take the jobs seriously and represent the NYSC well.