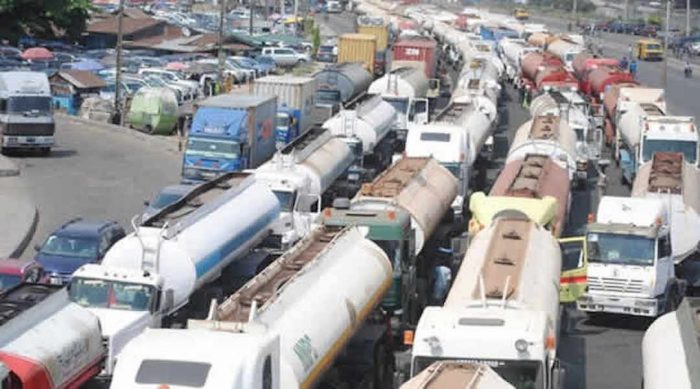 In line with the mandates given to the Constituted Special Traffic Management Enforcement Team by the Governor of Lagos State, Mr. Babajide Sanwo-Olu to resolve the incessant gridlock that has plagued Apapa and its environs, the Lagos State Government has continued to engage the trailer/truck owners unions and other stakeholders towards eliminating the traffic congestion on that corridor and in the State at large.

At the Stakeholders Meeting with representatives of trailer and truck owners unions which was held at Adeyemi Bero Auditorium, the Secretariat, Ikeja, the Special Adviser to the Governor on Transportation, Hon. Oluwatoyin Fayinka, who is the Chairman of the Special Traffic Management Team, reiterated that any truck outside the call-up lists generated by the Nigerian Ports Authority would be impounded if caught obstructing the flow of traffic on the roads.

He disclosed that petitions from residents of Apapa, Ijora, Tincan, Sifax and Mile 2 received by the Ministry of Transportation, has been forwarded to his team against truckers unruly behaviour on the road which has prevented other road users from accessing their desired destinations with ease, appealing further to Stakeholders to cooperate with the State Government to remedy the situation.

The Special Adviser declared that non-compliance from trailer and truck operators will meet the full weight of the Law, advising that they utilize the grace period to get their act together and conform to directives issued out, he added that vehicles in poor conditions should be prevented from entering the ports and will be sanctioned if caught operating within the metropolis.

Fayinka also affirmed that the Nigerian Port Authority, the Nigeria Police, Federal Road Safety Corps and Lagos State Traffic Management Authority is working with his Team hand in hand with the information provided to manage traffic into Apapa and prevent the loitering of trailers and trucks along road which damage road infrastructure and contributes to traffic gridlock.

The representative of the Nigerian Ports Authority, Ayodele Durowaye while lauding Stakeholders present for their frank talk on Apapa situation, declared that the primary responsibility of N.P.A was cargo handling, stressing that the responsibility of keeping trucks at truck parks and holding bays during the process of port activities was solely that of the operators.

He alluded that trucks parked indiscriminately under and on the bridge as well as highways were an aberration and unbefitting in the Lagos Smart City Master plan, stating further that the State Government was within her rights to impound any truck causing obstruction and violating the States’ Traffic law as the ports were transit points that have been designed to cater for cargos temporarily.

The NPA Representative also assured that the Agency will submit the routing plan showing the allotted movement for trucks to shed more light on the impediments caused by the indiscriminate stop and search that tamper with the call up roaster and causing delay, recommending that allegations levelled against the Shipping lines, should be addressed with petitions which will enable penalties, including Ship Entry Notice Denials and Cancellation of licenses of the shipping line to be exerted.

In addition, Durowaye further disclosed that about 7000 trucks have been certified fit for the proposed digitalized call up system. He warned that on and after the 27th of February, trucks must approach the ports from a holding bay or truck park with a bar code to access the ports, stressing that all holding bays will be required to install CCTV cameras with 24/7 coverage, Access Control and 24/7 Power Supply to ensure adequate monitoring of the activities and movement of articulated trucks, trailers and tankers.

Also, present at the meeting was Lagos State Commissioner of Police, CP. Hakeem Odumosu. He assured that the Nigerian Police would back up all Lagos State Enforcement Teams and Agencies, adding that touts activities would be checked and the issue of unnecessary checkpoints at the Port’s axis would also be collapsed as this was necessary in order to checkmate illegal business activities.

In the Affirmative, the Lagos Sector Commander, Federal Road Safety Corps, Olusegun Ogungbemide proposed that Standard Operational Procedures be developed to outline the role of every stakeholder in solving Apapa gridlock, adding that a harmonized strategy on the part of the unions and synergized efforts with terminal operators will aid in tackling the situation holistically.

In tandem with Commissioner’s words, the General Manager, Lagos State Traffic Management Authority (LASTMA), Engr. Olajide Oduyoye warned that under no circumstances should any LASTMA Officer be attacked or harmed while discharging their duties, he advised that corrupt Officers be reported with evidence.

They also requested the Special Traffic Management Enforcement Team to take deep steps and acquire necessary authorization to probe the Shipper’s Council, APMT, the Law Enforcement checkpoints and Port operations, explaining that the unnecessary queues to the Ports that extend for weeks were being fuelled by the aforementioned groups.

Closing the meeting, The Permanent Secretary in the Ministry of Transportation, Mr. Kamar Olowoshago thanked all stakeholders for their participation and contributions to the cause at hand, assuring that the deliberations reached will be considered for the benefit of all stakeholders in the sector.