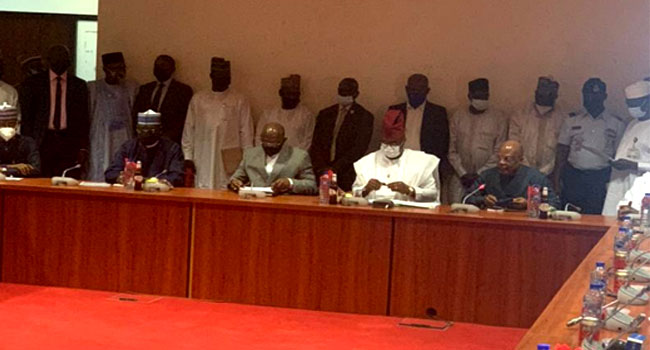 The former service chiefs sit before the Senate Committee on Foreign Affairs for the screening.

The Senate Committee on Foreign Affairs is currently screening immediate past Service Chiefs.

President Muhammadu Buhari had on February 4 nominated the immediate service chiefs for the position of ambassadors.

However, the on-going screening exercise is led by Senator Mohammed Bulkachuwa.

The former Chief of Defence Staff, General Abayomi Olonisakin was the first to be screened.

He explained that research which he conducted on forests three years ago shows that Nigeria has over 1,000 forest reserves and there is an urgent need to man and protect the forests which have become hideouts for criminals.

The Former Chief of Army Staff, Lieutenant General Tukur Buratai during his screening also spoke concerning the security crisis in the country.

He lamented that the terrorists have permeated the society and won the communities to their side.

According to him, the solution to the security crisis in the country is a multi-pronged approach and military warfare alone is not the solution.

He added that there are so many ungovernable spaces in the country with no government presence. The government he says must provide infrastructure in these communities to win the people and it will take another twenty years to resolve this crisis.