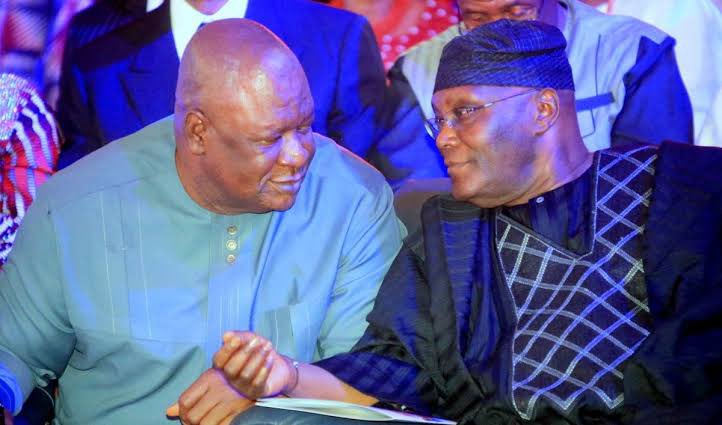 Atiku Abubakar, a former Vice-President of Nigeria, has congratulated former Senate President, Dr. Anyim Pius Anyim on the occasion of his 60th birthday.

In a statement released on Friday morning, Atiku hailed the former Senate President for his simplicity, unassuming nature and spirit of cooperation.

“On behalf of my family, I felicitate with former Senate President, Dr. Anyim Pius Anyim on the occasion of his 60th birthday. His simplicity, unassuming nature and spirit of cooperation and compromise are inseparable attributes of those who run the institutions of democracies,” Atiku stated.

Anyim was born in Ishiagu, a dominantly Catholic community in the Ivo Local Government Area of Ebonyi State.

He served as the coordinator of, Youth Mobilisation Programme in Sokoto State.

In 1992, Anyim became the Head of Protection Department at the National Commission for Refugees, Abuja, a job that included the provision of legal services and political protection for refugees. In this capacity, he traveled to various parts of the world.

However, the death of General Sani Abacha on 8 June 1998 nullified the result. During the transitional regime of General Abdulsalami Abubakar, he joined the People’s Democratic Party (PDP) and again ran successfully for election to the Senate in 1999.

Anyim took office in the Senate in May 1999 and was elected President of the Senate in August 2000, after Chuba Okadigbo had been impeached, holding office until May 2003.