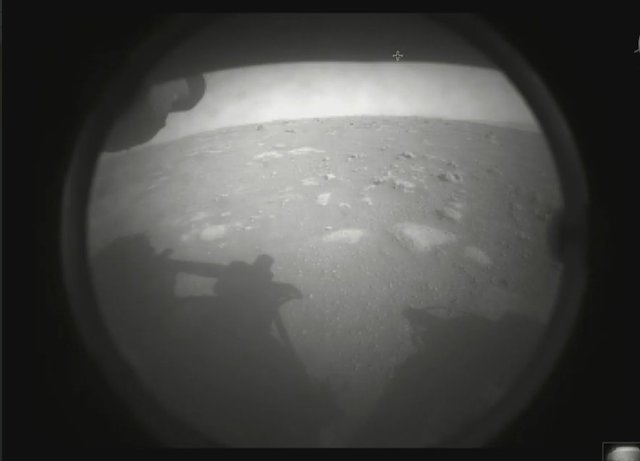 The first image of Mars that the rover Perseverance sent down to Earth. Photo NASA

NASA’s science rover Perseverance, the most advanced astrobiology laboratory ever sent to another world, streaked through the Martian atmosphere on Thursday and landed safely on the floor of a vast crater.

It was its first stop on a search for traces of ancient microbial life on the Red Planet.

Mission managers at NASA’s Jet Propulsion Laboratory near Los Angeles burst into applause, cheers and fist-bumps as radio beacons signaled that the six-wheeled rover had survived its perilous descent and arrived within its target zone inside Jezero Crater, site of a long-vanished Martian lake bed.

“Touchdown confirmed,” Mohan Swati, the lead guidance and operations specialist announced from the control room. “Perseverance safely on the surface of Mars.”

The robotic vehicle sailed through space for nearly seven months, covering 293 million miles (472 million km) before piercing the Martian atmosphere at 12,000 miles per hour (19,000 km per hour) to begin its descent to the planet’s surface.

Moments after touchdown, Perseverance beamed back its first black-and-white images from the Martian surface, one of them showing the rover’s shadow cast on the desolate, rocky landing site.

Because it takes radio waves 11 minutes to travel from Mars to Earth, the SUV-sized rover had already reached Martian soil by the time its arrival was confirmed by signals relayed to Earth from one of several satellites orbiting Mars.

The spacecraft’s self-guided descent and landing during a complex series of maneuvers that NASA dubbed “the seven minutes of terror” stands as the most elaborate and challenging feat in the annals of robotic spaceflight.

The landing represented the riskiest part of two-year, $2.7 billion endeavoor whose primary aim is to search for possible fossilized signs of microbes that may have flourished on Mars some 3 billion years ago, when the fourth planet from the sun was warmer, wetter and potentially hospitable to life.

Scientists hope to find bio-signatures embedded in samples of ancient sediments that Perseverance is designed to extract from Martian rock for future analysis back on Earth – the first such specimens ever collected by humankind from another planet.

Two subsequent Mars missions are planned to retrieve the samples and return them to NASA in the next decade.

Thursday’s landing came as a triumph for a pandemic-weary nation still in the grips of economic dislocation from the COVID-19 pandemic, a public health crisis that complicated execution of the Mars mission.

“The seven minutes of terror are very exciting. But on the other hand, the mission’s just started,” JPL Director Michael Watkins said shortly after touchdown. “We built the mission not to land, but actually to drive, and to get the samples and do the other technology demonstrations.”

SEARCH FOR ANCIENT LIFE
NASA scientists have described Perseverance as the most ambitious of nearly 20 U.S. missions to Mars dating back to the Mariner spacecraft’s 1965 fly-by.

Larger and packed with more instruments than the four Mars rovers preceding it, Perseverance is set to build on previous findings that liquid water once flowed on the Martian surface and that carbon and other minerals altered by water and considered precursors to the evolution of life were present.