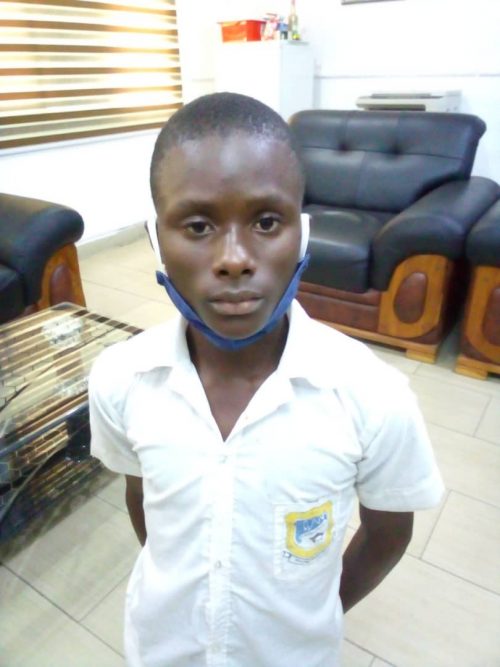 Samaki Azozo, the student arrested in Niger after raising false alarm on kidnappers

The Niger State Police Command has arrested a 15 year-old student who raised a false alarm that kidnappers are targeting his Government Science School Izom, in Gurara Local Government Area.

Usman, in an interview in Minna, said the SS2 student posted a fake letter on the notice board, notifying the staff and students that kidnappers were coming to the school to kidnap them.

He said that the letter created panic among staff and students of the school.

The prankster said he wrote the letter so that the school can be shut, so that he could return to Kuje Abuja, to continue his education.

“My father forced me on transfer to my present school from Government Secondary School Kuje in FCT Abuja.

“I personally arranged this so that our school will be closes down to enable my father transfer me back to my former school.

” I am not just comfortable in my school. Hence the reason for me to create false impression that kidnappers are coming to kidnap students.

” It was only by so doing that my father will agree to my request to transfer me back to Government Secondary School Kuje to complete my education.

“I really don’t know how it all happened. I just woke up at night, wrote the letter notifying the school authorities through the notice board that kidnappers are coming to our school”,he said .

The police commissioner said the command is not taking the prank lightly.

Armed security personnel have been deployed to the school to ensure the safety of staff and students, he said.

” We don’t want to be taking unawares hence the need for us to adopt a proactive security measures against any security threats”, Usman said.

The Commissioner said that the command has embarked on intensive investigations on the Kagara kidnap and others.

He appealed to the public to assist the command with information that could assist in the ongoing fight against banditry and kidnapping in the state.

He also urged parents and guardians to monitor the conduct and behaviour of their wards.

Gov. Abubakar Sani-Bello of Niger on Wednesday confirmed the abduction of 27 students, three staff and 12 family members by gunmen at the Government Science College, Kagara, in Rafi Local Government Area of the state.

The gunmen stormed the school on Wednesday at 2 a.m., killing one student and kidnapping 27, three staff of the college and 12 others at the school.

Also 40 passengers of a bus coming from Kontagora to Minna were abducted by gunmen on Feb. 14.

Eeight out of the 40 passengers abducted, had regained freedom.

The remaining are still in the hands of their abductors, who are demanding ransom.