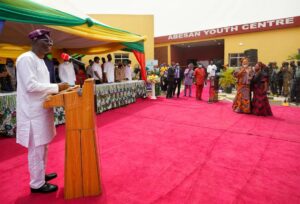 Sanwo-Olu said at the inauguration that the centre embodied his administration’s commitment to a legacy of youth development and the acceleration of social development programmes.

Earlier, he had said at the presentation of the 2021 budget on Nov. 10, 2020, that his administration’s planned to focus on youth engagement and social works as a means of promoting equitable economic prosperity for all Lagosians.

According to him, the youth centre is being replicated in other parts of the state with work already 75 per cent completed at the Ikeja Youth Centre.

”The youth centres in Badagry, Epe, Obalende/Ikoyi, Orile-Agege and Ibeju Lekki will also be inaugurated this year while work has already commenced on the Ikorodu and Surulere youth centres.

”A major thrust of this administration’s development agenda is the cultivation of a healthy youth population that is vibrant, self-reliant, entrepreneurial, industrious and gainfully employed.

”It is in line with this that the Lagos State Government conceived the idea of building modern youth centres with state-of-the-art facilities across the state.

”With vocational training rooms for catering, tailoring, shoemaking and hairdressing, a football pitch, a basketball court, and an ICT room, we are poised to ensure that our youth have all they need to work in purpose and fulfil their God-ordained destiny.

”As a government, we will play our role in eradicating the menace of substance abuse, which is why this centre is also equipped with a counselling room,” he said.

The governor said that in the counselling room, youths would be mentored and also have access to trained counsellors who would provide the therapy needed to overcome mental and substance abuse issues.

”I share the opinion of the Greek Philosopher, Diogenes, who said the foundation of every state is the education of its youth. This is our guiding philosophy and it has bolstered our drive to make sure our youth succeed.

”As we play our part in providing the enabling environment for our youth to thrive, I encourage them to pick up the gauntlet by seizing the opportunity to be trained and equipped for the future.

”They can begin to register at this youth centre for the vocational courses of their choice from the beginning of March.

”Enrolment is completely free, and we have designed this youth centre in such a way that it will be managed by respected members of the community, a representative of the youth and the Lagos State Ministry of Youth, Sports and Social Development.

”I assure you that every youth who enrols here for training will be fully supported until they are able to stand on their own. We will provide startup assistance at the end of the training so they can hit the ground running as social entrepreneurs,” he said.

He said that the youth were partners for change, and the government would continue to do all it could to ensure that they were not economically disadvantaged.

According to him, with the massive investment in the youth centres across the state, youths no longer have an excuse to fail.

He said that even those who were educationally disadvantaged could pick up a skill with which they would eventually become decently employed.

Sanwo-Olu said that the government was aware that there could be no meaningful sustainable development without youth who were economically empowered.

”We can achieve a lot with the energy, ideas, and innovativeness of the youth because their meaningful contributions can help to expedite the change we seek.

”Lagos State will keep harnessing the strength of its over 10 million youth population; we will continue to utilise bold approaches to meaningfully engage the youth until we have an entirely productive youth population,” Sanwo-Olu said.

The Commissioner for Youth and Social Development, Mr Olusegun Dawodu said that the reconstruction of various centres in the state was to give more young people the opportunity to build their physical, mental health, personal and cognitive capacity.

Dawodu said that it was also to enable creativity, citizenship and civic competencies.

”Lagos State has a youth population estimated to be 10 million out of the estimated 23 million people in the state.

”Thus, mapping a strategy to enhance, develop, create opportunities and effectively utilize this significant population is a priority for the state,” he said.