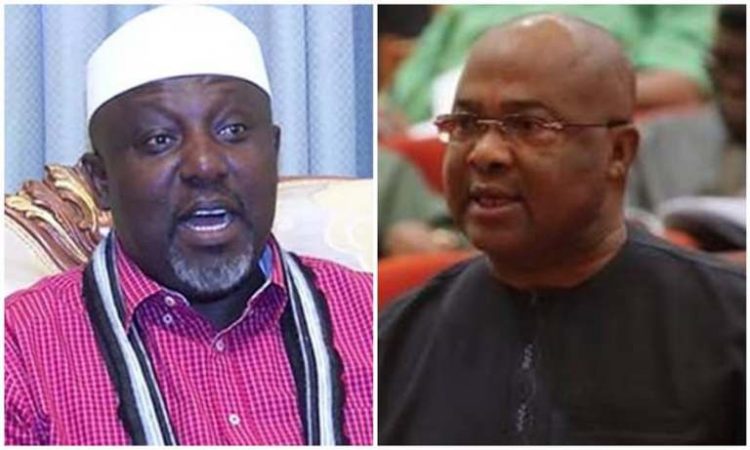 Okorocha says and Uzodinma is a liar

Rochas Okorocha, on Thursday, said it would be contemptuous for Governor Hope Uzodimma and Imo State House of Assembly to rename the Eastern Palm University.

The former Imo governor said the university was set up based on a public-private partnership between the state and the Rochas Foundation.

Governor Uzodimma had announced the renaming of the institution to K. O. Mbadiwe University shortly after the son of the late politician and ambassador, Greg Mbadiwe, decamped to the All Progressives Congress (APC).

The state Assembly on Wednesday repealed the law establishing the university.

However, Okorocha, in a statement by his media aide, Sam Onwuemeodo, said the repeal only existed in the minds of those behind it.

“The law establishing the University prescribed the PPP arrangement.

“Since that was the setting, the Assembly, therefore, defaulted or had acted in contravention of the law by not getting the consent or agreement of the two parties involved, on the reported repeal.

“In other words, the repeal only existed in the imaginations of those behind it,” he said.

The Senator accused the state government and the lawmakers of disregarding a pending court case on the matter.

He said: “For both the Assembly and the government to be taking one-sided decisions on the fate of the university, without reference to the main party and the court matter, has only made their actions questionable and contemptuous.

“A university is not a street one can rename or change its name at a polling unit where he had gone to revalidate his membership of APC. So, the claimed renaming of the university does not add up in reality.

“The purported repeal of the law establishing the university without recourse to the position of one of the parties has also made the Assembly a willing party in the matter in court.

“Until the court decides on the matter before it, there is nothing anybody can do about that.”

The former governor said he established and got licences for five universities and four polytechnics while he was governor.

He asked Uzodinma to tell Imo people why he was not talking about those universities and polytechnics but has only been interested in the Eastern Palm University with a PPP status.