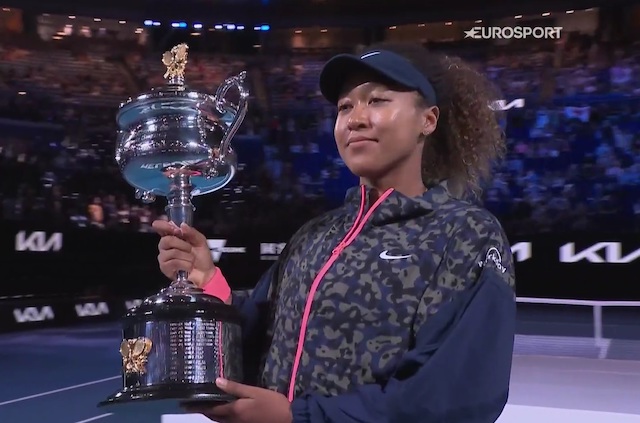 She also drew level with the likes of Kim Clijsters in terms of Slams won.

Osaka andd Brady had met before at the semi-final of the US Open last year.

Fans hoping for a repeat of the pair’s engrossing match then were left disappointed as Brady froze in the spotlight of her first Grand Slam final.

Osaka also played some way short of her best tennis and joined Brady in contributing to a dour, error-strewn first set.

But she settled to clinch six straight games, roaring to a 4-0 lead in the second before serving out the match to love.

A big serve sealed it, causing Brady to fire a forehand return long, and Osaka held her racket over her head and beamed in an understated celebration.

Osaka, who won the 2019 tournament, offered Brady warm congratulations and thanked the fans at the trophy ceremony.

“When we played in the semis of the U.S. Open, a couple of months ago, and I told everyone that ‘Listen you’re going to be a problem’. And I was right,” said Osaka, who will be world number two when the rankings are updated.

“It feels really incredible for me. I didn’t play my last Grand Slam with fans so just to have this energy it really means a lot.”

Twenty-five year-old Brady in her response said: “First I would like to congratulate Naomi on another Grand Slam title.

“She’s such an inspiration to us all and what she’s doing for the game is amazing and getting the sport out there and I hope young girls at home are watching and are inspired by what she’s doing.”