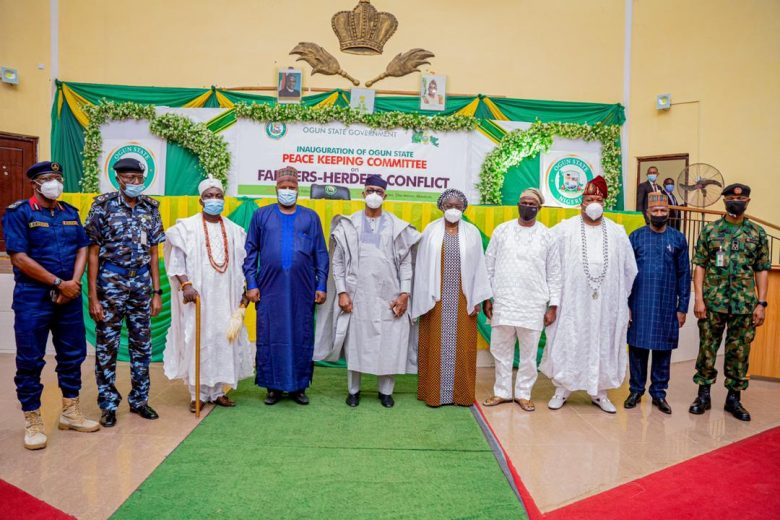 Ogun Governor, Prince Dapo Abiodun, on Saturday inaugurated a 20- member Peace Keeping Committee charged with the responsibility of investigating the remote and immediate causes of clashes between farmers and herders in some parts of the State.

The Committee, headed by a former member of House of Representatives, Hon. Kayode Oladele, was also charged with the responsibility of proffering solutions that can help put an end to the clashes between farmers and herders.

Speaking at the occasion, Governor Abiodun expressed hope that the Committee would unravel actions responsible for the frequent clashes between farmer and pastoralists in the State.

The governor also ordered the Ministry of Housing and that of Special Duties to rehabilitate all displaced persons and work out compensation for all victims of the skirmishes across the state within 24 hours.

“Government believes with the Committee, what really happened to disrupt the peace of the areas will be made known because knowing what happened will prevent occurrences and how to solve it.

“You will ensure that the clashes do not happen again. But if it happens, you will know the steps to be taken. You will also look at any other matter that threatens peace in the State”, the Governor said.

The Committee, according to  the Governor has four weeks to carry out and submit its assignment, adding that it would be a standing one saddle with the responsibility of engendering peaceful co-existence in the State.

He added that President Muhammadu Buhari was impressed with the methods adopted by the State government to address the farmers-herders crisis.

He added that this has made the President to direct other states in the country to adopt the same template in resolving the farmers-herders crisis in their areas.

The Governor said palliatives would be given to all farmers and herders affected in the clashes while directing the Committee to liaise with the Ministry of Special Duties for seamless distribution and the Ministry of Housing for provision of accommodation to those whose houses were destroyed.

Governor Abiodun  noted that no meaningful development would be achieve if clashes like that of the farmers and herders is allowed to continue.

He added that the aim of the State was to become number one in Internal Generated Revenue in the country.

In his welcome address, the  Secretary to the State Government, Mr. Tokunbo Talabi, noted that the Committee arose from a lot of brain storming on the part of government, adding with  inauguration, the State was setting a standard in conflict resolution in the country.

He said it was imperative for members of the Committee to understand the magnitude of their responsibilities and come up with solutions that would engender peaceful co-existence.

In their goodwill messages, the Southwest Coordinator of Miyetti Allah Cattle Breeders Association of Nigeria (MACBAN), Alhaji Kabir Muhammed, lauded the State government for setting up the Committee while the representative of Fulani Youth in the State, Abumumuni Ibrahim, pledged the cooperation of his group towards finding lasting solutions to the clashes.

However, the Onimeko of Imeko, Oba Benjamin Olanite, stressed the need for proper demarcation for all concerned to know their limit, while the member representing Yewa North in the Ogun State House of Assembly, Hon. Haruna Abiodun, noted that peace would return to the axis when each group agrees to operate within its bounds.

Speaking on behalf of other members of the Committee, a member of Ogun State House of Assembly from Imeko Constituency, Hon. Jemili Akingbade, thanked the Governor for his timely intervention in settling the dispute. He assured that the committee will live up to expectations by diligently carrying out its terms of reference.