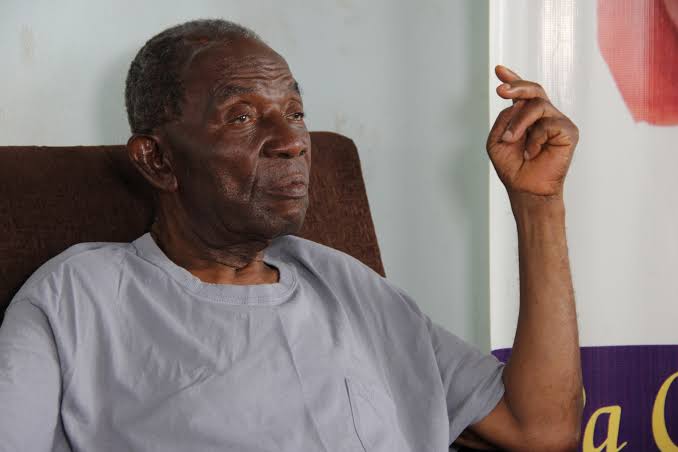 The Copyright Society of Nigeria (COSON) on Sunday mourned the death of the veteran musician, Chris Ajilo, who died at the age of 91.

Chris Ajilo, the ‘Eko O Gba Gbere’ crooner died in his Ijebu-Ijesha hometown in Osun on Saturday, Feb.20 after a brief illness.

Tony Okoroji, Chairman of COSON, in a statement, while paying tribute to the highlife veteran, said that Nigeria had lost an irreplaceable music icon.

“Nigeria has lost an irreplaceable music icon in the passing to glory of the boundless Chris Ajilo.

“I worked with the great Chris Ajilo in so many endeavours. In each case, his dedication, humility and contributions were first class.

“He was a member of my Executive Council in the golden years of PMAN. He was also the General Manager of Performing & Mechanical Rights Society (PMRS) while I was the chairman.

“There is no doubt that Chris Ajilo laid the foundation stone on which COSON was built.

“While he had retired before the transition of PMRS to COSON, he remained an unflinching member of COSON.

“He was attending and participating actively in every major event of the society and giving total support toward the progress of COSON.

“In 2017, when Lagos State celebrated 50 years of the creation of Nigeria’s most vibrant state, Ajilo’s music: ‘Eko O Gbagbere’ was chosen as the iconic song that captured the essence of Lagos, its spirit and the beauty of its people.

“Lagos went for the song that year. Decade after a decade, the song has become the anthem of Lagos. ‘Eko O Gbagbere’ was composed in the early 60s by the master musician, Chris Ajilo.

“Ajilo was the man who led the Independence Band at the Federal Palace Hotel in 1960.

“He was the people’s saxophonist, a music teacher by calling, artiste and a repertoire manager with a difference, a producer of numerous hit songs and numerous hit artistes and the quintessential copyright man.

“On Nov. 5, 2017, at the COSON Song Awards at Eko Hotel, the music industry and many lovers of music stood up to celebrate the anthem of Lagos, ‘Eko O Gbagbere’.

“This evergreen song will never die and so also the creative genius behind the song, the master musician, Chris Ajilo.

“Yes, all of us on the Board, membership, management and staff of COSON will miss the irreplaceable Chris Ajilo.”