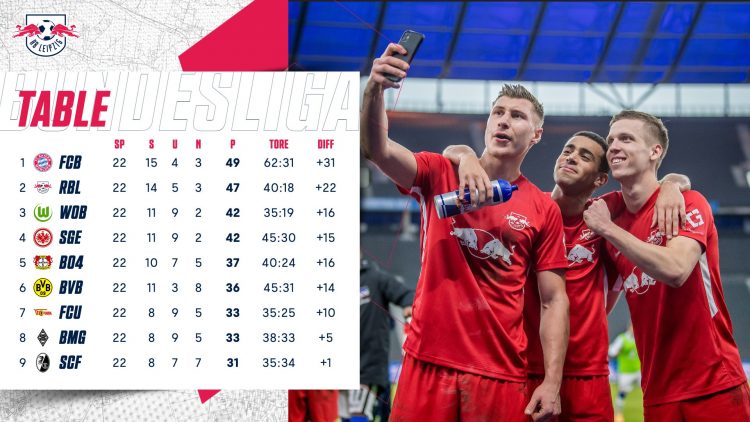 Also, an Edmond Tapsoba goal deep into stoppage-time secured Bayer Leverkusen a point with a 1-1 draw at Augsburg.

In the late Sunday clash, Hoffenheim put up a stunning performance to beat Werder Bremen 4-0.

Leipzig opened the scoring in the first half just when Hertha Berlin seemed quite dangerous.

Sabtizer’s spectacular effort from outside of the penalty box stunned goalkeeper Rune Jarstein, who was left helpless.

Hertha Berlin had chances to equalise but goalkeeper Peter Gulacsi saved Matheus Cunha’s shot early in the second half.

But RB Leipzig avoided any extra drama as Nordi Mukiele fired the ball into the net.

There was a video assistant referee (VAR) review but the goal stood.

With six minutes left on the clock Willi Orban headed in a third after an assist from Sabitzer to clinch the three points in Berlin.

The result helped them to capitalise on Bayern Munich’s 2-1 loss at Eintracht Frankfurt on Saturday.

“Very important three points,” Sabtizer said. “If we focus on our game, it [title race] will be exciting until the end. It doesn’t help to talk about it [title]. We have to do something.”

While RB Leipzig can dream with the trophy, Hertha Berlin have relegation nightmares.

They stay out of the danger zone but tied on 18 points with Arminia Bielefeld, who occupy the relegation play-off spot.

“We had our goal chances to take the lead, to tie. At the end you look at the result, it doesn’t make us look good,” Hertha Berlin coach Pal Dardai said.

“It’s psychologically difficult for the boys, defeat after defeat. The passion was there, but you need to score goals,” he added.

Diadie Samassekou’s through ball found Ihlas Bebou running towards the penalty box, and he shot past goalkeeper Jiri Pavlenka to open the scoring for Hoffenheim.

At first the goal was disallowed for offside, but a VAR check found he was onside and the opener counted.

Just before the break, Christoph Baumgartner took advantage of a poor clearance to play a one-two with Munas Dabbur and double Hoffenheim’s lead.

Four minutes into the second half Dabbur controlled the ball before knocking it into the net for a third, and a last act by Georginio Rutter sealed the win.

“We have invested a lot and things worked really well,” Bebou said after the game. “I thought I was offside, but now we know the play goes until the end and can be reviewed.”

Hoffenheim leapfrogged Werder Bremen in the standings and are now 11th, eight points off the relegation zone.

Werder Bremen dropped to 12th, five points off the danger.

Before the game, Werder Bremen coach Florian Kohfeldt said his situation at the club has not changed after Marco Rose decided to leave Borussia Moenchengladbach.

Rose will take the head coach position at Borussia Dortmund in the summer and Kohfeldt has been linked to a possible Gladbach move.

“Nothing changes directly for me just because a coach somewhere else decided to change clubs,” Kohfeldt said.

“I really, really like being Werder Bremen coach. We have such a strong bond here.

“The players, Frank Baumman [managing director] and I, we’ve known each other for so long and work together in a spirit of trust. There’s nothing to talk about,” he added.

After the defeat, Kohfeldt said Werder Bremen had a “terrible day.”

Augsburg’s opener came from Florian Niederlechner in the fifth minute but not without a big help and a bizarre mistake by back-up goalkeeper Niklas Lomb.

He was deputising for injured first-choice Lukas Hradecky.

Tim Fosu-Mensah was able to stop Augsburg’s counter-attack by passing the ball to Lomb.

But the goalkeeper, who had his first Bundesliga start on Sunday, touched the ball and nudged it with his standing foot.

Niederlechner was waiting and simply tapped into the goal.

But when Augsburg were about to celebrate a very important win in the fight against relegation, they were stunned by Tapsoba with the last kick of the game.

“It’s very, very bitter, I must be honest. Very difficult,” Augsburg defender Felix Uduokhai said. “It hurts a lot but we must keep it together.”

On the Bayer Leverkusen side, Sven Bender was happy with the point: “I was happy at the end. The early setback didn’t make things easy,” he said.

With the draw, Augsburg remain 13th, five points away from the relegation play-off spot.