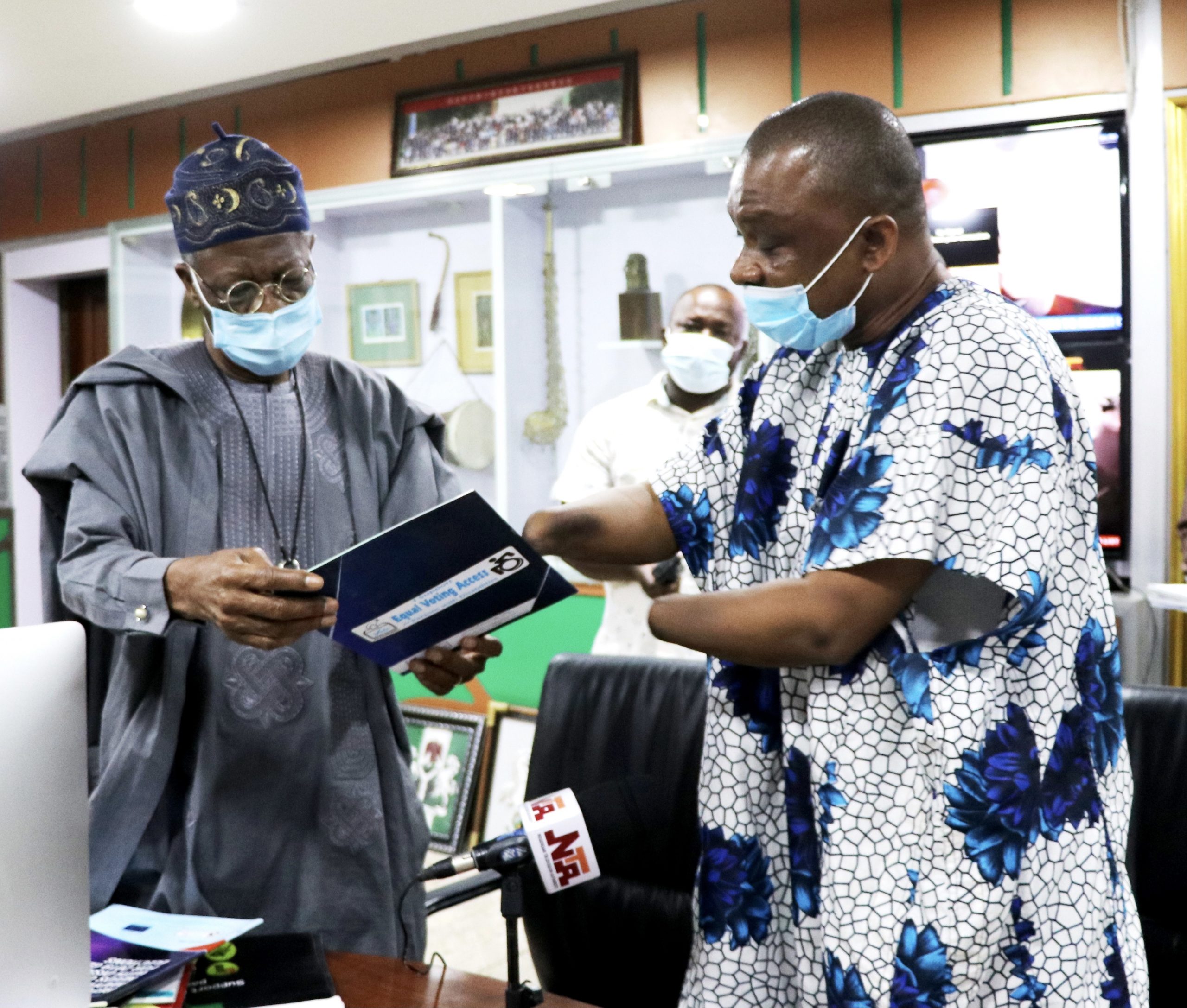 Minister of Information and Culture, Alhaji Lai Mohammed (left), reviewing some publications by the Centre for Citizens with Disabilities when the Executive Director, Mr. David Anyaele (right), led other members of the Centre on a courtesy visit to the Minister in Abuja on Monday

The Federal Government has directed TV stations to in line with National Broadcasting Code, deploy sign language interpreters during their major newscasting.

Alhaji Lai Mohammed, the Minister of Information and Culture, gave the directive on Monday in Abuja during a virtual meeting with the officials of the Centre for Citizens with Disabilities (CCD).

He said that the directive would be officially communicated to all public and private TV stations on Tuesday.

A sequel to a complaint by the Executive Director of CCD, Mr David Anyaele that many of their members were being discriminated against without the sign language component during newscasting.

Anyaele who was physically present at the meeting, said he was making the request on behalf of the 31 million Nigerians living with disabilities.

The minister noted that the sign language component during newscasting was backed by the NBC code and the directive would go out to TV stations to comply with the provision.

He assured that his ministry would collaborate with the Centre in the implementation of the relevant sections of the Discrimination Against Persons with Disabilities (Prohibition) Act, 2018 assented to by President Muhammadu Buhari.

Mohammed said he was glad that some states had domesticated the Law, particularly Lagos and Ekiti states that were meeting with the imperatives of the Act.

He said the body must be proactive in ensuring the implementation of the provision of the Act that all public organisations are to reserve at least five per cent of employment opportunities for Persons With Disabilities (PWD).

Earlier, Anyaele thanked President Buhari for making the Disability Act a reality after more than 18 years of struggle.

He solicited the support of the minister in the sensitisation process of the provision of the Act as well as capacity building.

This Disability Act prohibits all forms of discrimination on the ground of disability.

The Act imposes a fine of N1 million for corporate bodies and N100,000 for individuals or a term of six months imprisonment for violation.

Among others, the law, prohibits discrimination in public transportation facilities and directs service providers to make provision for the physically, visually and hearing impaired and all persons howsoever challenged.