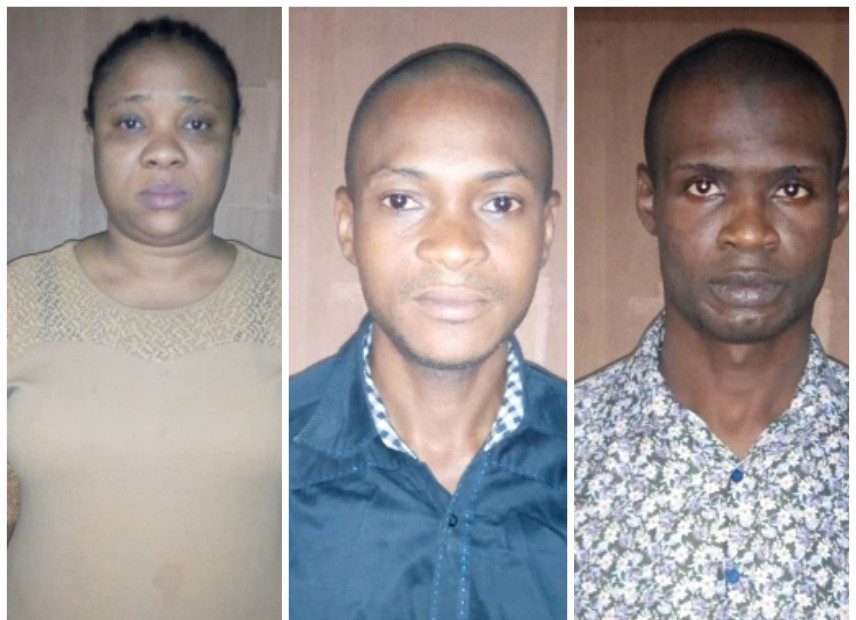 A former banker, Ugwumba Evangeline and two other suspected fraudsters were on Monday, February 24, 2021, arraigned by the Port Harcourt Zonal Office of the Economic and Financial Crimes Commission, EFCC, before Justice E. N Anyadike of the Federal High Court sitting in Umuahia, Abia State.

They were arraigned on four-count charges bordering on conspiracy, and obtaining money by false pretence to the tune of N14, 100,000( Fourteen Million, One Hundred Thousand Naira only).

The other two defendants are Onyekachi Christian Nwagbo and Chiwendu Okeke.

They pleaded “not guilty” to the charges when they were read to them.

Count One of the charges read:

“That you Ugwumba Evangeline, Onyekachi Christian Nwagbo, Chiwendu Okeke and Okparauwakwe Emmanuel Chigozie (now at large) on or about 8th November, 2016 at Umuahia, Abia State within the jurisdiction of this Honourable Court did conspire amongst yourselves to commit felony to wit; obtaining money by false pretence contrary to Section 8 (a) of the Advance Fee Fraud and Other Fraud Related Offences Act 2006 and punishable under Section 1 (3) of the same Act.

In view of their pleas, prosecuting counsel, E. K Ebipade prayed the court to fix a date for commencement of trial. However, counsel to 1st defendant, M. O Eze, and counsel to 2nd and 3rd defendants, B. C. Ogu, both made oral applications for the bail of their clients.

Justice Anyadike granted the defendants bail in the sum of N2, 000,000.00(Two Million Naira only) each and two sureties in like sum. Sureties must be resident in Umuahia and Aba metropolis respectively. Also, sureties and defendants are to deposit two recent passport photographs with the court. Sureties must show evidence of tax payment and must swear to an affidavit of means.

The judge adjourned the matter till April 5, 2021, and ordered the defendants to be remanded in Umuahia Custodial Centre, pending the perfection of their bail conditions.

Trouble started for the three defendants when a petitioner, Daniel Igwe Onumah alleged that he deposited a total sum of N14, 100,000 into a trading account: Yo-yo Oku Trading Ventures, operated by the defendants for foreign exchange transactions.

Specifically, the petitioner sought the dollar equivalent of the money paid into Yo-yo Oku Trading Ventures transferred to his foreign partners and the defendants allegedly assured him that the money would be transferred as arranged.

Ugwumba, a former staff of a new generation bank allegedly introduced the petitioner to the group.

Investigations showed that the money was neither transferred to the foreign partners as arranged nor returned to the petitioner.