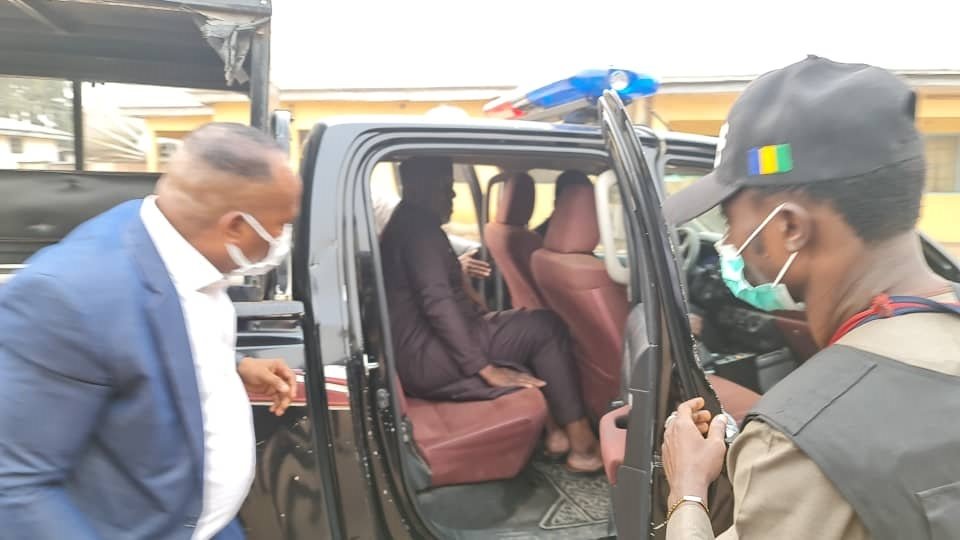 Rochas Okorocha being taken away by the police

The Orlu Political Consultative Assembly (OPOCA), a political body in Orlu Senatorial District of Imo, has given Sen. Rochas Okorocha 48 hours to apologise to Imo Government over his attempt to reclaim Royal Spring Palm Estate.

The group made the demand at a news conference in Owerri.

Okorocha, former governor of Imo, was on Monday arraigned before an Owerri Magistrates’ Court for unsealing Royal Spring Palm sealed by the state government.

He was later released under bail.

However, OPOCA threatened to recall Okorocha from the National Assembly if he failed to apologize.

Mr Rex Anunobi, OPOCA National President, said that Okorocha behaved in a way unbecoming of a former governor and a Senator when he arranged with some boys to break a property sealed by the state government.

“The OPOCA, after an extraordinary emergency meeting, is using this opportunity to give the former governor and Senator representing Imo West in the National Assembly, Rochas Okorocha, 48 hours from today to apologize to Gov. Hope Uzodimma for the shame his recent, but uncivilized action has brought to the state.

“If after 48 hours, Okorocha fails to apologise to our governor and Imo people, OPOCA will be left with no option, but to initiate a recall process that will aim at existing Rochas Okorocha from the Senate of the Federal Republic of Nigeria,” he said.

Anunobi called on Uzodimma not to be distracted by what it called the antics of the former governor, but fully activate all instruments of the law and state powers to recover all that were looted by Okorocha, his family members and ‘cronies’ in Imo.

He recalled that a few days ago, the state government, acting in accordance with a gazetted White Paper and in line with its “recovery” move, sealed a property known as Royal Spring Palm located along Akachi Road and purportedly owned by Okorocha’s wife.

“The only option available to Okorocha in the instant case, if he feels otherwise or disagrees with the action of the state government, is to approach the court, rather than invade the said property hitherto sealed by the government with thugs,” he said.

Anunobi said that the group, had on two occasions, intervened by mobilising and appealing to Orlu sons and daughters to support Okorocha irrespective of his “anti-democratic actions”.

He said they did so not necessarily to save Okorocha, but to protect the collective and overriding interest of Orlu zone.

Anunobi said that OPOCA’s mandate was to protect, without compromise, the individual and collective political interest of Orlu sons and daughters both home and in the Diaspora.

“It is, therefore, in view of the foregoing that OPOCA rises to condemn in strong terms the brigandage, thuggery, hooliganism and lawlessness action unleashed against the state by Okorocha and his men on Sunday, Feb. 21,” he said.