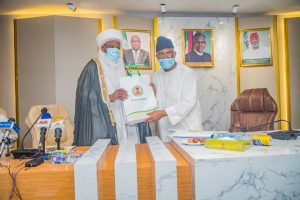 The Sultan of Sokoto, Alhaji Sa’ad Abubakar III, has urged the National Hajj Commission of Nigeria (NAHCON) to improve service delivery by ensuring that pilgrims get value for their money.

He also charged the commission to be self-reliant by trying to keep away from government funding.

Abubakar III, who is also the President-General, Nigeria Supreme Council for Islamic Affairs (NSCIA), gave the task when he visited the Executive Chairman of NAHCON, Alhaji Zikrullah Hassan, on Wednesday in Abuja.

He said pilgrims pay lots of money, recalling that he (Sultan) introduced the Hajj levy some years ago to enable the commission to raise money.

According to him, with the number of pilgrims going to Hajj every year and each one paying N5,000, if judiciously utilised, the commission will be able to achieve a lot.

“I have said it several times to the Federal Government and to the President then, Goodluck Jonathan, on two to three occasions that we submitted Annual Hajj Reports to him.

“I told him that we want the Central Bank of Nigeria (CBN) to work with us so that we take Federal Government off from Hajj issues like is done in other countries like Indonesia, Malaysia and others,” he said.

However, the Sultan urged the leadership of NAHCON to consolidate on the achievements recorded by the previous management of the commission to ensure that Nigerian pilgrims got the best during Hajj operations.

The NAHCON boss said the commission had resolved to intensify the drive for Internally Generated Revenue through the facilitation of Infrastructure Concession and Regulatory Commission (ICRC) for Public-Private Partnership (PPP) to develop Hajj Camps and its land property.

This, according to him, will keep the commission busy throughout the year instead of only during Hajj periods.

According to him,  the NAHCON’s digital transformation agenda is targeted to enhance operational efficiency following the Saudi Arabian Digitalisation of Hajj processes.