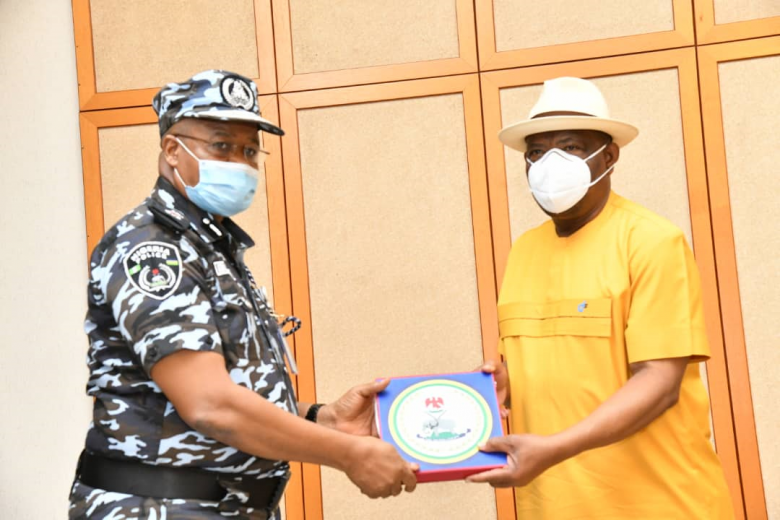 The Governor of Rivers State, Nyesom Ezenwo Wike being presented with a plaque by the new Rivers State Commissioner of Police, Mr Friday Eboka, when the latter paid a courtesy visit at the Government House, Port Harcourt on Friday

Governor Nyesom Wike on Friday alleged that a man who was not in police uniform but was armed with AK 47 blocked his convoy at Waterlines Junction, Port Harcourt and trailed his convoy until his security details  stopped him.

However, the Governor who made the unbelievable revelation when the new Rivers Commissioner of Police, Eboka Friday visited him in his office did not say whether the man was arrested or the action taken by his security aides against the suspect.

Nevertheless, he asked the new police commissioner to step up his game as incidents of crime are increasing in Rivers State.

He said, “Yesterday (Thursday), I was going out for inspection. We saw one guy carrying Ak47, not on Police uniform. He was on mufti, blocking us from Waterlines Junction when we went to inspect the Rivers State Assembly’s quarters on-going project.

“We moved on to inspect the Speaker’s residence project, and the man was still following us. So,the security wondered what’s going on and stopped him.”

Wike therefore urged the new Police Commissioner (CP) Eboka Friday, to shun politics and  stay within his professional mandate to fight crime without fear or favour.

Citing the abduction of over 300 school girls in Zamfara state on Friday, the governor said there is so much criminality in the society and professional Police Officers should not abandoned their duties of doing their best in protecting life and property for any other interest.

He added that nobody should be above the law and if any criminal is arrested, such person should be charged to court not even a politician demands for such favour.

“Because if I support the person who is kidnapping, it may be my turn tomorrow, I won’t always be Governor.

“So, whatever you can do with your team, please I beg you in the name of God, provide security. Don’t come here and play politics.”

The governor said he is not unmindful that some persons  may have recommended him to be posted to Rivers State, but he admonished the CP to let his conscience guide him.

He commended the CP for reorganising the C4I  unit of the State Police Command and pledged to support the team to succeed in their task to combat crime.

Wike observed that the level of kidnapping in the State has increased because the immediate past CP  abandoned his duty and was hobnobbing with non-state recognised Chiefs.

He noted that innocent citizens are killed needlessly by such police officers and asked the new CP to rid the Police of such bad elements and ensure sanity is restored.

“The level of kidnapping has gone high in the society. Your former colleague abandoned the job and was being deceived by some people who feign that they are traditional rulers.

“It’s most unfortunate that the former CP will be going to traditional rulers to be hosting him. It’s a shame. Now,  Nigerians don’t have confidence anymore in security agents.”

Wike disclosed to the new CP that his administration has provided the State Police Command not less than 150 vehicles. But, he regretted that most of the vehicles have been mismanaged and some diverted.

In his speech, CP Eboka said he has dissolved the E-Crack team of the State Police Command because of the uncanny report against it and redeployed the officers to other units.

He told the governor that he needs an effective synergy with all stakeholders,  especially the Rivers state government to succeed on his mission of crime fighting.

“My duty, essentially in this State is to fight crime and criminality. I know I cannot do that work alone without synergy with other stakeholders.

“I want to assure you (Governor) that any assistance given to us will be used to improve the security of this State. I’ve told my men,  that there is no arm chair policing in my administration. My officers have been warned to shun corruption, be civil with the public, and we will not tolerate accidental discharge.”