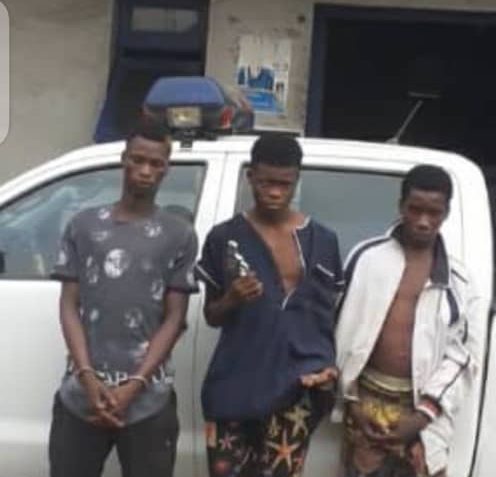 The Lagos State Police Command has arrested two suspected armed robbers in connection with an ongoing investigation into the case of another arrested suspected robber, Peter Arinola.

Arinola, popularly known as ‘Blood’ was arrested with an English pistol at Empire area of Surulere recently while he was threatening and harassing a commercial sex worker.

However, the two suspects were arrested by the police operatives attached to Idimu Division at the heels of the enhanced intelligence emplaced by Surulere and Idimu Divisions with a view to apprehending the suspects who were still suspected to have some arms in their possession.

The suspects Sheriff Shonibare, m, aka ‘Stainless’ and Quadri Ayonuga, m, aka ‘Sugar,’ were arrested in Idimu during a stop and search operation on 23rd February, 2021, as a follow up to the intelligence.

“They are assisting the police in their investigation as many revelations are being made,” a statement issued by Command’s spokesperson, Muyiwa Adejobi said.

In another development, the operatives of the Rapid Response Squad, RRS stormed a criminal hideouts in Mushin Area of Lagos State and arrested three kingpins of some bad/deadly gangs and other suspected armed robbers whose names were yet to be released by the command as the investigation was ongoing.

The RRS Operatives, who operated in Mushin and other parts of the state on the Mainland over the weekend, also impounded 29 motorcycles as part of the onslaught against criminals and lawlessness in the State.

The operation, which was led by the Commander, Rapid Response Squad (RRS), CSP Olayinka Egbeyemi was a follow up to earlier discreet investigations by the squad’s Decoy Team to Eko Boys High School, Showunmi Street and Itire Road, all in Mushin.

The impoundment of 29 motorcycles during the weekend operation was to reduce the reported incidence of traffic robbery and in enforcement of the restriction order of the State Government on the corridor for motorcyclists.

The motorcycles were impounded  on BRT lane in Ikeja Along and Ile Zik as well as Allen Junction, which are restricted routes for motorcycles.

While reiterating the order of the Commissioner of Police, Lagos State, CP Hakeem Odumosu, Egbeyemi disclosed that the enforcement of the restriction of motorcycles would continue in order to restore sanity to the areas and reduce robbery incidents in notorious spots on the corridor.

The Commissioner of Police has directed that Egbeyemi works with other investigation units to conclude investigations on the kingpins and other suspects arrested in Mushin while the motorcyclists would be charged to Mobile Court, Oshodi with immediate effect.