Wilfred Ndidi: “One of three” that could win African Player of the Year 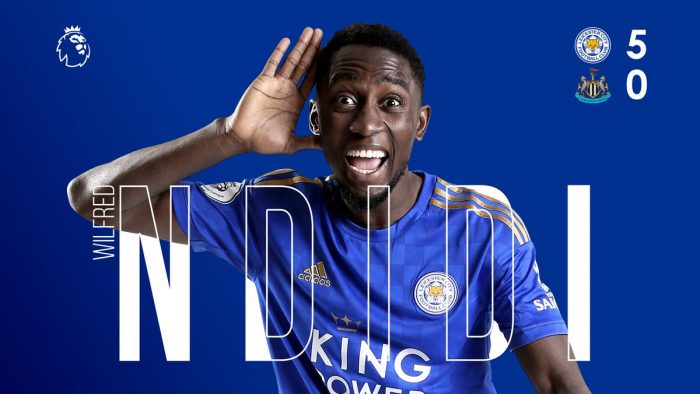 Nigerian international midfielder Wilfred Ndidi should be in the conversation for 2020/21’s African Player of the Year award.

That’s the view of former Wolverhampton Wanderers and Nigeria player Seyi Olofinjana, who believes Ndidi should be “one of the three” nominations for this season’s gong.

Although Olofinjana acknowledges that the likes of Sadio Mane and Mo Salah are “doing the business” in the final third, there is more to the game than the so-called “flashy stuff”, which Ndidi brings in spades to Rodgers’ flying Foxes.

It has been another watershed season for Brendan Rodgers’ Leicester City. After 25 games of the 2020/21 English Premier League (EPL), the Foxes are in the third position, only behind second-placed Manchester United on goal difference.

Their odds in the EPL winner futures market at FOX Bet tells you all you need to know about how well they’ve performed.

Leicester are one of the most free-flowing teams to watch this season. The likes of James Maddison and Harvey Barnes have proven to be perfect foils for the Foxes’ legendary striker Jamie Vardy.

However, for Messrs Maddison and Barnes to do their damage in the final third and absolve themselves of considerable defensive responsibilities, the likes of Wilfred Ndidi have to provide a rock-solid foundation in front of the backline.

A remarkable return from injury against champions Liverpool

Ndidi was recently out of action through injury, which was a big blow to Leicester’s title aspirations.

However, he returned just in time to face last year’s EPL champions, Liverpool, at the King Power Stadium, putting in a dominant display to smother Liverpool’s attacking options en-route to a 3-1 victory for Leicester.

Ndidi was at his industrious best, racking up 19 ball recoveries – more than any other EPL player has achieved in one game so far this term. Ndidi wasn’t finished there either.

He clocked 12 successful duels, won six aerial battles and made five key clearances. The cherry on top was an assist for one of City’s three goals.

Olofinjana believes it’s these selfless and industrial performances that should push Ndidi firmly into the conversation for this year’s award.

He added that Ndidi is a key figure for Leicester in “connecting” the team from back to front. That’s why he is insistent that Ndidi should be “recognised” for “what he brings to the table”.

Olofinjana played a similar role for the Super Eagles, who recently fell in the latest FIFA rankings, acting as the driving force in Nigeria’s engine room for well over a decade.

He appreciates how some defensive-minded midfielders are all too easily underappreciated, which makes Ndidi’s performances even more impressive for the way he’s “taken England by storm since 2017”.

Olofinjana believes he is the best African midfielder of his type “without a shadow of a doubt”, rivalling the likes of Thomas Partey who recently moved from Atletico Madrid to the EPL with Arsenal.

Ndidi has been with the East Midlands club for over four years now.

Before Christmas 2016, Leicester agreed a £17 million fee for Ndidi’s services with Belgian side Genk.

Ndidi spent two seasons with Genk, making 61 appearances and scoring four goals. He shot to prominence in the Belgian League after scoring an audacious long-range goal against Club Brugge.

The sheer magnitude of the game, coupled with the technique of the strike, saw his goal played again and again on social media platforms.

His volley was heading at such a velocity, with the ball calculated to have been moving at 111km/h into the net.

Ndidi is by no means recognised for his goalscoring abilities since then, with just seven goals in 132 senior appearances for Leicester.

He’s got on the scoresheet just once in the 2020/21 EPL season, with his strike contributing towards an impressive 2-0 victory over Chelsea.

If he does begin to add more goals to his game, he could become an even fiercer prospect on the domestic and international stage.