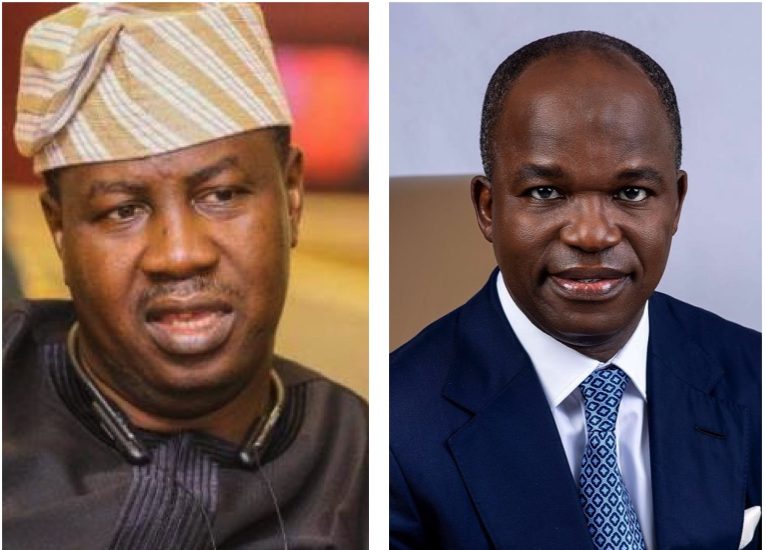 Babatunde Gbadamosi of PDP and Tokunbo Abiru of APC

The plaintiff, Gbadamosi is claiming that Abiru was ineligible for the election on ground relating to alleged double voter registration and indigeneship.

However, Abiru, who won the election by a landslide, polling 89,204 votes against Gbadamosi’s 11,257 votes filed objection to the suit.

The presiding Judge, Professor Chuka Obiozor in his judgement on Monday, while citing the Supreme Court’s decision of Agi versus PDP, dismissed the suit on the ground that the issue of double registration was not enough ground to disqualify a candidate.

The judge agreed with the defendant’s lawyer’s argument that part of the reliefs sought by the Plaintiffs were statute barred having not been brought within 14 days of the accrual of the cause of action as contemplated under Section 285 of the constitution.

The court also held that the Independent National Electoral Commission (INEC) could transfer a voter’s registration details contrary to the arguments of the PDP and Gbadamosi.

Consequently, the reliefs sought by the Plaintiffs predicated upon this allegation were dismissed.

On the issue of registration or double registration, the judge held that registration is not a disqualifying factor under Section 65 and 66 of the constitution.

Thus, the allegations of double registration cannot disqualify the 2nd Defendant and the reliefs sought thereon were dismissed

The PDP and its candidate had claimed in the suit that Abiru was ineligible for the bye-election conducted on December 5, 2020 on alleged double voter registration and indigeneship.

The applicants had through their counsel Ebun-Olu Adegboruwa, (SAN) urged the court to disqualify Abiru as a candidate in the bye-election.

Other respondents in the suit are the Independent National Electoral Commission (INEC) and the APC.

However, Abiru, who won the election by a landslide, polling 89,204 votes against Gbadamosi’s 11,257 votes, argued through his counsel, Kemi Pinheiro (SAN) that the suit was incompetent, defective, statute-barred, commenced via a wrong procedure, and ought to be struck out.

Pinheiro contended that the case of the plaintiffs lacked merit as Abiru was duly nominated and qualified for the said bye-election.

In particular, Abiru and APC in their preliminary objections to the suit, contending that same was statute barred not justifiable in law.

He stated that the Plaintiff formulated nine issues which related to double registration and the indigeneship but that rather than argue the said issues, the Plaintiffs went on to argue two new different and distinct issues.

The senior lawyer further argued that the only thing left for the Court to do was to strike out the said Originating Summons for being defective.

As regard Gbadamosi’s allegations of crime against Abiru, the counsel stated that the suit was a civil action brought by originating summons and the court could not make a finding on an allegation of crime.