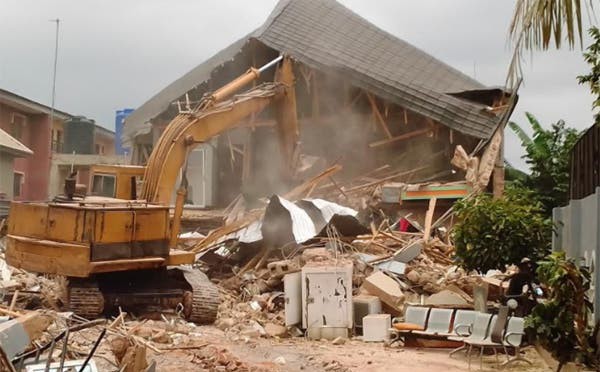 The Federal Ministry of Works and Housing has carried out the demolition of shanties and illegal structures on the right of way at Toyota Bus Stop, along Oshodi-Apapa Expressway, in Lagos.

Citing reasons for the demolition, the Federal Controller of Works in Lagos State, Mr. Kayode Popoola, said the shanties have delayed the beautification and the reconstruction of the Toyota section of the busy expressway.

Popoola further said the ministry held meeting with spare part dealers and traders and they were served to vacate the area.

“The Minister of Works and Housing, Mr. Babatunde Fashola, held a meeting with them on January 14, 2021, over their illegal occupation of the right of way, and gave them time to vacate the place for reconstruction works.”

Assuring spare part dealers whose wares seized by the task force because they were not around to move their wares away, Chairman, Task Force, Governor’s Office, Mr. Shola Jejeloye, said: “If the dealers sign an undertaking that they will not return to the place, their seized wares will be returned to them.”

Speaking on the demolition, Martins Obidiozor, Manager, Unity Warehouse, said they were served notice to vacate the place, but he had nowhere to move his wares to, that was why he left them outside.

Obidiozor said: “We want the government to allow us to make use of the right of way because when we offload our goods, everything does not enter our warehouse.”