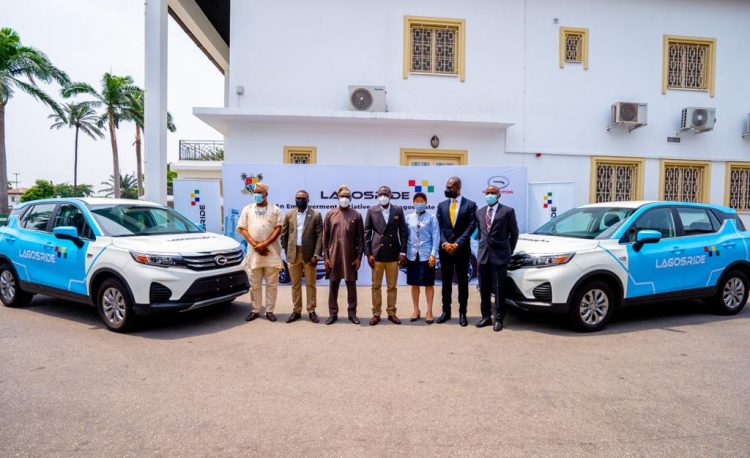 The event which held at the Lagos House, Marina also featured the Signing of Agreement for the establishment of Motor Assembly Plant in Lagos State.

Speaking at the event, Governor Babajide Sanwo-Olu said that the Lagos State Taxi Scheme was another innovative policy of his administration, targeted at making life easier for Lagosians, improving mobility and creating a seamless multi-modal transportation system.

He said the scheme would create jobs, accelerate socio-economic growth, and further put the state on the global map as the centre of excellence and a modern megacity committed to sustainable development.

The governor stated that a major attribute of a modern megacity was a world-class transportation system with inter-connected services and mobility choices for the citizens.

Sanwo-Olu said the task of bequeathing a safe, efficient, quick, and modern public transportation system is a key thrust of the administration’s T.H.E.M.E.S. Agenda.

”We are guided by the need for an equitable transportation system with mobility choices for our people. The Taxi Scheme, to be known as ”Lagos Ride”, which is being commissioned today is in fulfilment of our desire to give Lagosians transportation choices.

”It is one of the Lagos State Government’s socio-economic intervention programmes- a modern ride-hailing service that will be professionally managed in line with global best practices.

”Under the Lagos State Taxi Service, drivers/operators will be given the cars for a period of four years during which they pay a monthly installment and they will have the opportunity of owning the cars, after they have fully paid the hire amount.

”The Lagos State Taxi Service is structured along a profitability model, it is self-sustaining and able to expand and regenerate itself,” he said.

Sanwo-Olu added that the Lagos State Taxi Service represented everything Lagos State stood for; as it was a viable means of promoting the Lagos Brand.

The governor urged the drivers and operators to be of good conduct; as it was their chance to promote Lagos State as a place of opportunities with a level playing ground for everyone who was ready to work hard to accomplish their dreams.

Sanwo-Olu said that the establishment of the Motor Assembly Plant was expected to revive industrialisation, increase citizens’ employment and wealth creation, boost tourism, and encourage technology sharing, adaptation, and advancement.

”As we commission the taxis and sign the Joint Venture Agreement for the establishment of the Motor Assembly Plant, Lagosians should expect a roll-out of vehicles from this plant within the next 12 to 18 months.

”I urge the beneficiaries of the Lagos State Taxi Service to collaborate with us to sustain the Scheme. We have the political and administrative will to ensure the Taxi Scheme survives.

”I am hopeful that the operators will cooperate with the Lagos State Government to render excellent service to the people,” he said.

The Group Chairman, CIG Motors, Diana Chen said that the Assembly Plant and the Lagos Taxi Scheme were among Gov. Sanwo-Olu’s China Trip output and delivery.

”At the time when 1,000 units of branded beautiful GS3, GAC SUVs with high-tech technology arrive and run across Lagos streets and roads, also 1,000 well trained drivers will carry our happy customers that work and live in Lagos, at that time we will celebrate this exciting moment again,” Chen said.