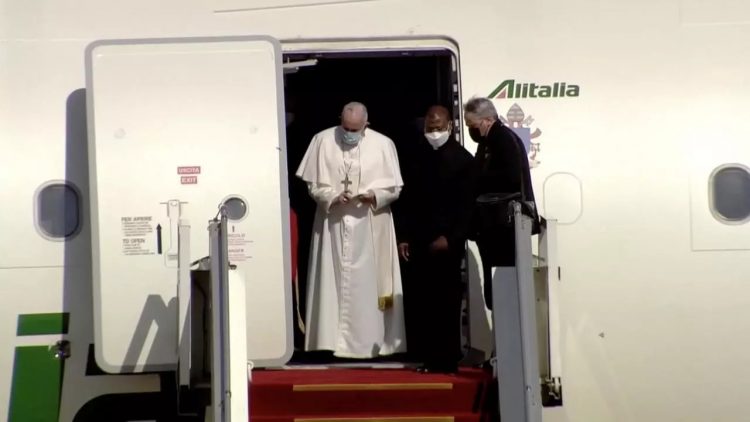 By Muhaimin Olowoporoku, with agency report

Pope Francis has landed in Iraq for a historic tour of the war-ravaged nation. He is expected to meet with members of the country’s Christian community and draw attention to their plight.

The trip, which marks the first-ever papal visit to Iraq, will also include meetings with the country’s top political and religious officials.

The visit comes amid rising Coronavirus infections and a tense security situation in the country.

Inside a hall at the airport, dozens of people waved flags and music was played to welcome the pope before he and al-Kadhemi sat down to talk.

Thousands of security forces have been deployed and extra checkpoints were set up in Baghdad.

The pope’s visit has been greeted with great excitement and people stood on both sides of the road to the airport waiting to welcome him.

However, the capital was largely empty due to a lockdown set to last until late on Sunday, though the streets were filled with pictures of the pope and Vatican flags flew in many places.

“Thank you for accompanying me, I am very happy to be able to resume the journeys,’’ Francis told reporters on the flight.

Later on Friday, he is due to meet with Iraqi President Barham Salih as well as church and civil society representatives.

The 84-year-old will then travel across the country during his four-day visit.

He will head south to meet influential Shiite cleric, Grand Ayatollah Ali al-Sistani, in the city of Najaf on Saturday, followed by an interfaith meeting in Ur, which is mentioned in the Bible as the home of Abraham.

On Sunday, the pope will go to the northern autonomous Kurdistan region before heading to Mosul and Qaraqosh, where he will pray for the victims of the conflict with the Islamic State extremist group, who seized large areas of northern Iraq in 2014, killing and displacing thousands.

There were once more than 1 million Christians in Iraq, but now they are estimated to be between 250,000 and 400,000 after years of war, religious persecution and a steep economic decline.

The latest attack was on Wednesday when rockets targeted an airbase in western Iraq.

In Cairo, the head of the prominent Sunni Muslim institution Al-Azhar, Ahmed al-Tayyeb, described the visit as “historic and courageous.’’

It “sends a message of peace, solidarity, and support to all Iraqi people,’’ said al-Tayyeb who met with the pope in early 2019 in the United Arab Emirates.