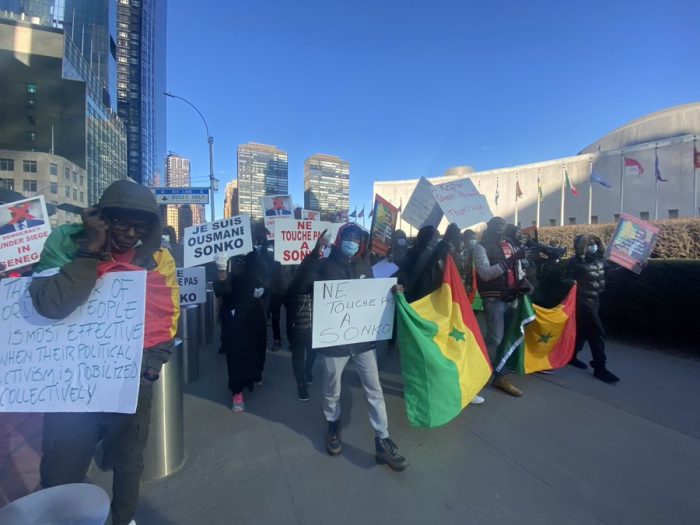 Senegal: Free Sonko demonstrators at the UN in New York

President Macky Sall of Senegal has come under fire of his compatriots after the arrest of main opposition leader Ousmane Sonko, on what is believed to be a trumped charge of rape.

The arrest has sparked two days of clashes Sonko’s supporters and the riot police.

One person was killed on Thursday, newswires reported.

However, local media reports claimed as many as four persons were killed, according to posts on Twitter.

The security response has in turn ignited a #freeSenegal hastag, in which Senegalese are dragging Sall as a dictator. They are also urging the Twitter influencers to join their campaign.

Cherif O.O.Diol who tagged @iamcardib, wrote: “My country is bleeding and your voice may bring a lot of change #FreeSenegal”

The hacker group Anonymous has heeded the call as it hinted that the internet connections in the country may have been cut.

“@Macky_Sall if you have a case against your opposition leader that is one thing. But you have no excuse to cut the internet or harm protestors. If you have nothing to hide let the world see and the people speak”, Anonymous tweeted.

Up till 10 a.m. on Friday, the FreeSenegal hashtag was gaining traction, with close to 150,000 tweets.

On Thursday, at Cheikh Anta Diop University in central Dakar, protesters lobbed rocks at police in full protective gear who occasionally fired their guns in response during an hours-long standoff.

“The government strongly condemns the acts of violence, looting and destruction of property,” the authorities said in a statement.

The government later said that one person had died in the clashes.

The death is the first in recent protests in support of Sonko, who was detained on Wednesday over rape accusations made by an employee at a beauty salon.

The politician, who came third in the 2019 presidential election, faces questioning after he was stripped of his parliamentary immunity last week.

The authorities have called on the army to back up police, who could face further unrest on Friday during a planned demonstration in support of Sonko by the popular protest movement “Y En A Marre” (Enough is Enough).

Protests have erupted in other parts of the country including in Sonko’s native Casamance region in southern Senegal, which is where the one man was killed, a local official said on condition of anonymity.